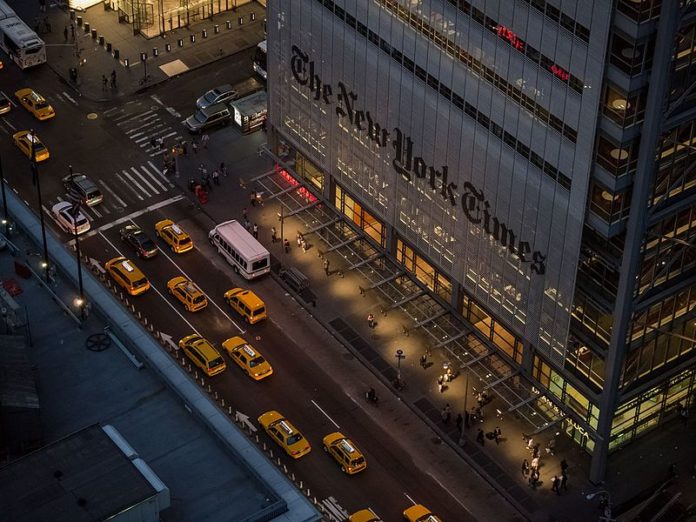 New York Times publisher A.G. Sulzberger fired back against President Donald Trump on Wednesday for accusing his newspaper of committing treason by writing a scathing editorial for the Wall Street Journal.

Earlier this week the New York Times reported that top intelligence officials have not been briefing Trump on their efforts to stop Russia from interfering with the upcoming 2020 election out of fear that he will stop them from defending our democracy. After all, Trump did solicit foreign meddling during an ABC interview on Sunday.

The intelligence community also fears that Trump could disclose sensitive information about the operation to the Russians to help them beat it.

…..ALSO, NOT TRUE! Anything goes with our Corrupt News Media today. They will do, or say, whatever it takes, with not even the slightest thought of consequence! These are true cowards and without doubt, THE ENEMY OF THE PEOPLE!

Just three days later, Sulzberger put out a well-written condemnation explaining to the American people that Trump “crosses a line” that the Founding Fathers sought to prevent by specifically defining treason in the Constitution.

“President Trump’s escalating attacks on The New York Times have paralleled his broader barrage on American media,” Sulzberger wrote. “He’s gone from misrepresenting our business, to assaulting our integrity, to demonizing our journalists with a phrase that’s been used by generations of demagogues. Now the president has escalated his attacks even further, accusing the Times of a crime so grave it is punishable by death.”

“Treason is the only crime explicitly defined in the U.S. Constitution,” Sulzberger continued. “The Founding Fathers knew the word’s history as a weapon wielded by tyrants to justify the persecution and execution of enemies. They made its definition immutable — Article III reads: ‘Treason against the United States, shall consist only in levying War against them, or in adhering to their Enemies, giving them Aid and Comfort’ — to ensure that it couldn’t be abused by politicians for self-serving attacks on rivals or critics. The crime is almost never prosecuted, but Mr. Trump has used the word dozens of times.”

He then warned Americans that Trump is moving closer toward trying to crush the press and the truth in his desire to become a dictator.

“Over 167 years, through 33 presidential administrations, the Times has sought to serve America and its citizens by seeking the truth and helping people understand the world,” Sulzberger concluded. “There is nothing we take more seriously than doing this work fairly and accurately, even when we are under attack. Mr. Trump’s campaign against journalists should concern every patriotic American. A free, fair and independent press is essential to our country’s strength and vitality and to every freedom that makes it great.”

If American doesn’t flock to the polls and send Trump packing in 2020, we could be watching the end of truth and the free press as Trump and his Republican enablers murder the Republic before our very eyes. And that would be actual treason against the United States.