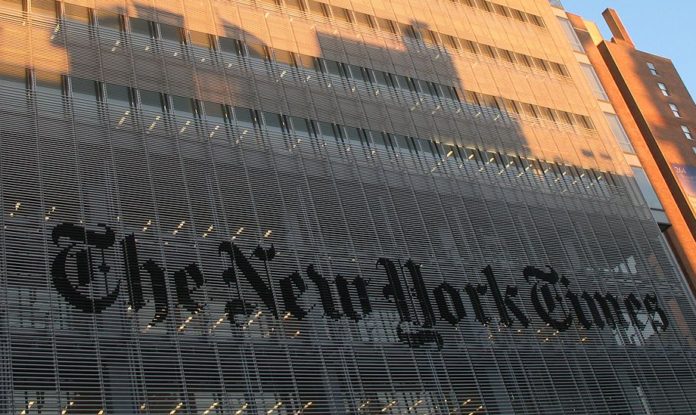 Earlier the same morning, Trump launched a Twitter tantrum against the New York Times for publishing a bombshell report revealing that he tried to install a crony at the Southern District of New York to sabotage investigations against him and his family.

The Press has never been more dishonest than it is today. Stories are written that have absolutely no basis in fact. The writers don’t even call asking for verification. They are totally out of control. Sadly, I kept many of them in business. In six years, they all go BUST!

The New York Times reporting is false. They are a true ENEMY OF THE PEOPLE!

However, it turns out the New York Times did reach out for comment by the White House but received no responses. And the White House can’t just expect a newspaper to delay publishing a major story. After all, Trump would likely delay stories all the time by forcing reporters to wait for comments that will never come. And even if he does respond it would likely be a lie.

Sulzberger fired back in defense of his newspaper and the free press in general in a statement posted by the New York Times.

“America’s founders believed that a free press was essential to democracy because it is the foundation of an informed, engaged citizenry,” Sulzberger wrote. “That conviction, enshrined in the First Amendment, has been embraced by nearly every American president. Thomas Jefferson declared, “The only security of all is in a free press.” John F. Kennedy warned about the risks to “free society without a very, very active press.” Ronald Reagan said, ‘There is no more essential ingredient than a free, strong and independent press to our continued success.’”

All these presidents had complaints about their coverage and at times took advantage of the freedom every American has to criticize journalists. But in demonizing the free press as the enemy, simply for performing its role of asking difficult questions and bringing uncomfortable information to light, President Trump is retreating from a distinctly American principle. It’s a principle that previous occupants of the Oval Office fiercely defended regardless of their politics, party affiliation, or complaints about how they were covered.

“The phrase “enemy of the people” is not just false, it’s dangerous,” Sulzberger continued, pointing out that it’s a phrase used by authoritarian leaders. “It has an ugly history of being wielded by dictators and tyrants who sought to control public information. And it is particularly reckless coming from someone whose office gives him broad powers to fight or imprison the nation’s enemies. As I have repeatedly told President Trump face to face, there are mounting signs that this incendiary rhetoric is encouraging threats and violence against journalists at home and abroad.”

Indeed, some of those threats and violence against journalists happens at Trump’s campaign rallies. All Trump is doing in encouraging more anti-press behaviors.

Sulzberger concluded by vowing to continue providing the free press’ fundamental role in a democratic society.

Through 33 presidential administrations, across 167 years, The New York Times has worked to serve the public by fulfilling the fundamental role of the free press. To help people, regardless of their backgrounds or politics, understand their country and the world. To report independently, fairly and accurately. To ask hard questions. To pursue the truth wherever it leads. That will not change.

If Trump thought he could declare war on the press to silence them, he just found out that he is wrong and that his threats and attacks have only backfired as the press works even harder than ever before to expose his corruption.