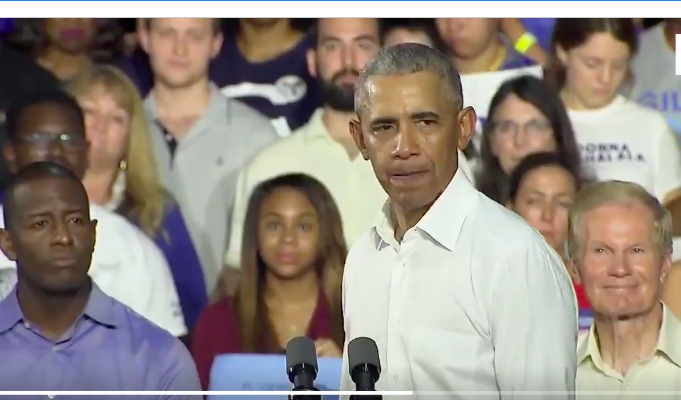 Former President Obama took to the campaign trail today to stump for Florida’s Democratic contenders including Senator Bill Nelson and Andrew Gillum. Nelson is seeking to retain his Senate seat while Gillum is hoping to become Florida’s first black Governor. Both are in tight races with their opponents from the Republican side of the aisle.

Obama was markedly more open and less “censored” than he was during his tenure as President. He called out Trump and other GOPers for blatantly lying and how Washington Republicans seem downright incapable of standing up to Trump, his lies, or racist/sexist rhetoric.

He also took a very measured (and some would say accurate) shot at Trump’s latest “crisis” — the caravan consisting of mostly women and children in Southern Mexico currently.

“They are telling you that the existential threat to America is a bunch of poor refugees a thousand miles away. they are even taking our brave troops away from their families for a political stunt at the border. And the men and women of our military deserve better than that.”

Barack Obama: "They're telling you the existential threat to America is a bunch of poor refugees 1,000 miles away."

"They're even taking our brave troops away from their families for a political stunt at the border. The men and women of our military deserve better than that." pic.twitter.com/nNvZhIal5F

There are many who would agree with former President Obama — besides the people in the packed hall cheering him on. They would agree that it is wrong to create a nonexistent crisis just to gin up fear and hate. Emotions Trump seems to be banking on to turn out votes for the GOP.

They would agree that it is wrong for the POTUS to abuse his power by using a Troop deployment to our border to “defend” against them (even though they are unarmed and 1,000 miles away) as if they are any threat whatsoever.

Many would agree that our troops could be doing much more productive things than defending against a nonexistent threat. Things like spending time with their families or actually doing things that protect our nation and our freedoms. Maybe help out the people of Puerto Rico or other recent disasters. Maybe just read their kids a bedtime story. ANy of it would be better for them and our nation than Trump’s senseless stunt in deploying troops to the border.