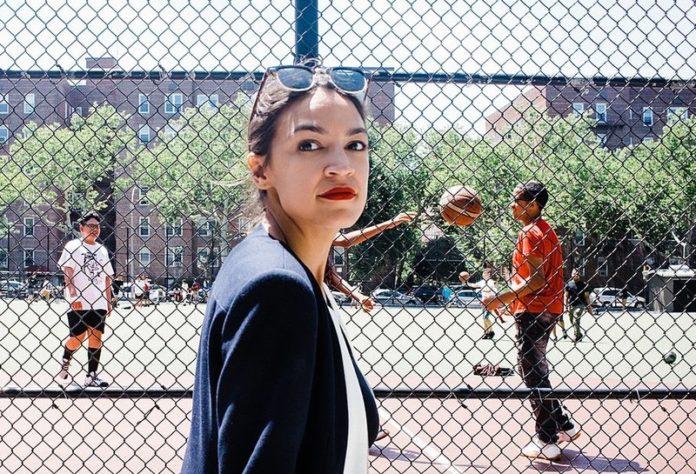 After Trump rejected a bipartisan continuing resolution to fund the government through early February that was passed by the Senate on Wednesday, House Republicans tacked $5.7 billion to the bill to pay for Trump’s wall, which is nothing more than a vanity project to satisfy his own ego.

It’s wasted spending, plain and simple. And Ocasio-Cortez called Republicans out soon after on their fiscal hypocrisy:

And just like that, GOP discovers $5.7 billion for a wall.

What if we instead added $5.7B in teacher pay?
Or replacing water pipes?
Or college tuition/prescription refill subsidies?
Or green jobs?

But notice how no one’s asking the GOP how they’re paying for it. https://t.co/jXdm1w9bpy

Indeed, every time Democrats propose spending money to improve healthcare, education, or infrastructure they get shot down by Republicans who claim we can’t afford it and ask how such programs are going to be paid for. Of course, it’s the same way they are trying to pay for Trump’s wall, with taxpayer dollars.

Only the Democrats want to spend taxpayer dollars to help the American people, not build a wall that won’t do anything to stop illegal immigration or drugs.

In fact, Ocasio-Cortez would go on to point out that for the same $5.7 billion, the government could could give every single child access to Pre-K education that would have long-term benefits for the people and the nation as a whole:

For the wall’s $5.7 billion, every child in America could have access to Universal Pre-K.

Yet when we propose the SAME $, we’re told Universal Edu is a “fantasy”& asked “how are you going to pay for it”

Education is an investment in society that yields returns.
Walls are waste. https://t.co/fs0nvq6LJq

Ocasio-Cortez is touching upon a common hypocrisy of Republican politics. During Barack Obama’s presidency, Republicans constantly complained about the debt and deficit and blocked Democratic legislation under the guise that we somehow can’t afford it. But when they have control of the government all of their pet projects somehow can magically be funded, and their concerns about the debt and deficit all of a sudden disappear. They will jack up the military budget and give massive tax cuts to corporations and the wealthy all while claiming that we can’t afford anything else that would directly benefit the American people and improve their lives.

And that’s despite Americans overwhelmingly supporting universal healthcare, education and infrastructure, all of which the United States desperately needs right now. But Republicans would rather enrich themselves and their wealthy buddies and make American taxpayers foot the bill, even though that’s the main cause of our debt problems.

Faced with the choice, Americans would much rather pay for universal healthcare, education and infrastructure instead of endless wars and tax cuts that won’t trickle down. That’s why Republicans lost big on Election Day and sent Democrats like Ocasio-Cortez to Congress. Unlike Republicans, Ocasio-Cortez and her fellow Democrats want to fight for domestic spending that will bring our country up to par with the rest of the developed world. And if we want to make our middle class strong again, we have to invest in it on a scale that we have not seen since the New Deal.