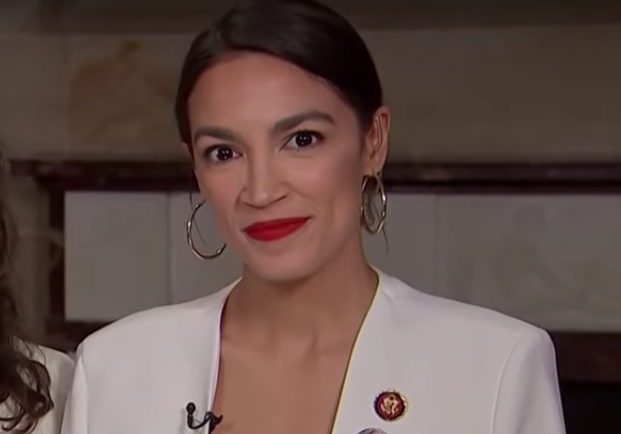 Rep. Alexandria Ocasio-Cortez (D-N.Y.) took Republicans to the woodshed on Tuesday for smearing her Green New Deal, all while revealing that Republicans and the fossil fuel industry have known about climate change for decades.

Ever since the freshman congresswoman introduced her sweeping legislation, the GOP have been attacking it in the most absurd ways, including by accusing her of wanting to ban air travel and take away everyone’s ice cream.

So, she addressed them head-on in a hard-hitting Twitter beat-down.

First, Ocasio-Cortez pointed out that she enjoys flying back to Puerto Rico to see members of her family, which would be hard to do if air travel were banned. And as she demonstrated during a recent appearance on The Late Show with Stephen Colbert, she absolutely loves to indulge in ice cream.

Trust me, I like ice cream way too much to do that.

Maybe if the GOP did their job for once & read a piece of legislation, they’d see that communities + jobs come FIRST, not last, in the #GreenNewDeal. https://t.co/b7oFVCkmGp

She then informed her followers that Republicans have known about climate change for years and that human activity such as pollution is the main cause.

We are already feeling the early nightmares of climate crisis, & the GOP is doing nothing to stop it – as they have for years.

I’ve been reading docs all week about how much people knew about climate + when.

They knew early. & Their goal has been to sow doubt this entire time. https://t.co/6YjVuKoevZ

Ocasio-Cortez then shamed the GOP for not even trying to prevent or reverse climate change even though thousands are dying because of the consequences.

Do you really think these increasingly regular & horrific wildfires & droughts are a coincidence?

That growing regularity of “100-year floods” is an accident?

And GOP doesn’t even care enough to try.

Then she linked to a scientific article that reveals ExxonMobil oil company has known about the problem for 40 years and responded by peddling misinformation in the name of profit.

If you want to read more, here’s a starter:https://t.co/D6q2LsOCFq

It turns out that ExxonMobil has known about climate change and the devastating effects of it on our planet since 1977.

According to Scientific American:

Exxon didn’t just understand the science, the company actively engaged with it. In the 1970s and 1980s it employed top scientists to look into the issue and launched its own ambitious research program that empirically sampled carbon dioxide and built rigorous climate models. Exxon even spent more than $1 million on a tanker project that would tackle how much CO2 is absorbed by the oceans. It was one of the biggest scientific questions of the time, meaning that Exxon was truly conducting unprecedented research.

Ocasio-Cortez concluded by noting that a majority of millennials support the Green New Deal.

Don’t mess with our future.

When it comes to climate, it’s all our lives at stake. The younger you are, the more consequences you’ll see.

It’s life and death for us.
And we will fight like it. https://t.co/jlyFGkzCUW

Republicans should seriously pass the Green New Deal or they can expect to have Ocasio-Cortez breathing down their necks until they finally relent. The question is will it be too late by the time they do.