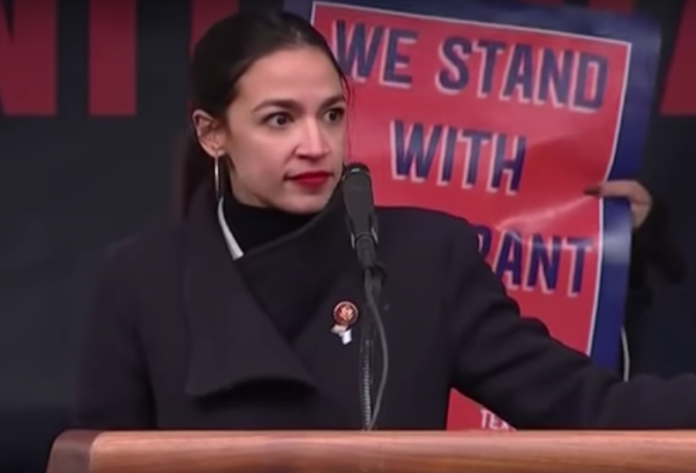 Rep. Alexandria Ocasio-Cortez (D-N.Y.) took her critics to the woodshed on Tuesday for claiming that she has no clue how tax giveaways to corporations like Amazon work.

Communities in New York recently forced Amazon to cancel a planned headquarters after the state offered $2.5 billion in tax breaks for the company along with $500 million in capital grants.

It’s a pretty steep price that New York taxpayers, or any taxpayers for that matter, shouldn’t be forced to handout because Amazon is a $1 trillion corporation with a CEO worth over $100 billion. Clearly, Amazon can afford to build their new headquarters without corporate welfare. Amazon also had problems with New York worker protection laws and opposes labor unions, which also did not sit well with the people.

After scoring the victory over the corporate giant, Ocasio-Cortez hailed the win as a community achievement in her inaugural address.

“We don’t have to settle for scraps in the greatest city in the world,” she said. “If others don’t want to negotiate with us, that’s not our problem.”

Needless to say, right-wingers and some Democrats attacked Ocasio-Cortez for opposing the deal by telling her that she doesn’t know how tax gifts for corporations work and that she somehow robbed New York residents of an alleged 25,000 jobs.

The progressive champion fired back on Twitter, first by pointing out that the New York state government could give working people a tax break instead and use capital grants to invest in public use projects.

Not sure how many pundits talking about Amazon even read the deal or where it was going.

It’s fair to ask why we don’t invest the capital for public use, + why we don’t give working people a tax break. https://t.co/jUqaugUHYP

In short, the deal would have been a waste of money that Amazon, nor Jeff Bezos, actually need.

She then laid into her critics for questioning her intelligence and continued pointing out the flaws of the deal.

Frankly, the knee-jerk reaction assuming that I “don’t understand” how tax giveaways to corps work is disappointing.

No, it’s not possible that I could come to a different conclusion. The debate *must* be over my intelligence & understanding, instead of the merits of the deal.

There’s NO WAY that this deal – one of the biggest giveaways in state history – could possibly have been bad, right?

Surely there can’t be anything wrong with suddenly announcing a massive restructuring & pricing out of a community without any advance notice or input from them.

There’s no CHANCE that the speculative insider real-estate buys that were creating immediate spikes in rent in one of the most rent-burdened communities in NYC could have possibly been unpopular?https://t.co/wArbA7B1Q6

Indeed, according to an analysis by Forbes:

The planned 25,000 jobs were to come over 10 years, meaning an annual 2,500. Nothing to dismiss as unimportant, but the New York City region already is adding more than 28 times that many jobs a year. No one stated whether the $150,000 average salary included cost of benefits, which would bring the number closer to $100,000. Given that is an average and that many of the positions were for developers, who command high salaries, quite a few of the jobs would probably have modest pay for the region, and there are already many high-tech jobs in New York. Given the difficulty many companies claim hiring people, having more jobs might mean more positions that don’t get filled, so little benefit to the region.

Furthermore, Amazon’s presence would have sent rent skyrocketing, including in neighborhoods where people are already struggling to pay high rent costs. More people in the area could also strain mass transit, which would require building more public transportation that would be paid for by taxpayers while Amazon doesn’t have to spend one dime to fix an issue it caused.

It also turns out that Amazon is working with ICE, a major concern to immigrant families in New York and a sticking point for Ocasio-Cortez, who has called for eliminating ICE altogether.

Or that a technology giant of big-brother-esque potential was selling (notoriously flawed & racially biased) facial recognition technology to ICE while trying to move into 1 of the most immigrant-dense areas of the world?

No, it must be because I’m dumb.https://t.co/IoBixav34r

In the end, she compared the deal to the deal Wisconsin made to bring FoxConn to the state, which has been a disaster as the foreign company gets billions of taxpayer dollars but will likely not provide the factory and jobs promised.

There was little in the fuzzy proposal that guaranteed jobs for actual NYers, yet lots of hard concessions from the public.

Queens saw how the FoxConn/Wisconsin disaster is working out – a $4.5 billion nightmare – & asked Qs.

The response? “This is above you, you won’t get it.”

I warned early to any & all that surging NYC costs+failing subways are creating major political forces to be reckoned with.

But I don’t know what I’m talking about, right?🤷🏽‍♀️

Add to that the fact that residents did not get an opportunity to voice their concerns because Amazon and the New York state government apparently kept the negotiations secret, and it’s pretty clear that New Yorkers did the right thing by rejecting Amazon and that Ocasio-Cortez knows exactly what she’s talking about.