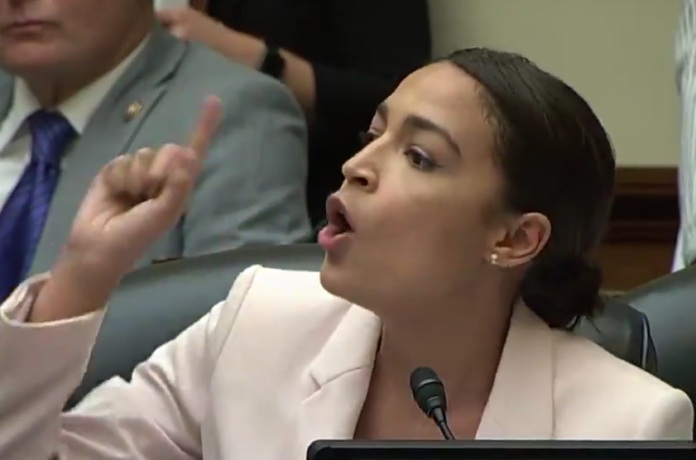 Rep. Alexandria Ocasio-Cortez (D-N.Y.) took Republicans to task on Wednesday for desperately trying to insert a racist citizenship question into the upcoming 2020 census.

President Donald Trump has fast-tracked the addition of the question rather than wait through the usual five-year process. Administration officials, including Commerce Secretary Wilbur Ross and Attorney General Bill Barr, are stonewalling Congress and lying in their testimony about the question, which has been challenged in federal court.

A political operative’s hard drive even revealed that the question is meant as a partisan voter suppression tactic against minorities to help Republicans.

During a House Oversight Committee hearing on Wednesday, Ocasio-Cortez took no prisoners as she demanded transparency into this obvious act of corruption on the part of the Republican Party.

“So many of our folks across the aisle think this is a debate about whether we should be asking who is a citizen or not in this country,” she began. “The census is a constitutionally mandated operation that we are required to implement every ten years. It is one of the most vital and sensitive things that we do in our government. Any change to the census, any addition of a question usually takes five years of a process to make sure that it is vetted, that every word has been tested, to make sure that it is effective, because it is one of the most important things that we do.”

She then tore into Trump associate Kris Kobach, who ran Trump’s scam voter fraud commission, for being one of the principle architects of the citizenship question.

“I want to know why people like Kris Kobach, with a résumé of voter suppression techniques in the state of Kansas, have their fingerprints all over the citizenship question on the census?” she said.

In the end, Ocasio-Cortez called for issuing subpoenas in defense of the rule of law, and holding officials in contempt if they refuse to comply with Congress’ authority.

Rep. @AOC rips citizenship question “magically added” to census, asking why it was included after a political operative detailed “an intent to intimidate racial and immigrant communities for a partisan purpose” https://t.co/7f99C4Sp9Z pic.twitter.com/8Ie5S9joX9

.@RepAOC @AOC on 2020 Census and holding Secretary Ross in contempt of Congress: “Any change to the census, any addition of a question, usually takes 5 years…I want to know is why this question was added, why 2 years have been shaved off that 5-year process.” pic.twitter.com/8OkK1kYXNQ

Our democracy is being dismantled piece by piece by the Republican Party so they can rig our elections far into the future. Cheating is apparently the only way they can win elections now, and they are so brazen about it they are doing it in plain sight. This cannot be tolerated in our country and we are lucky to have a lawmaker like Ocasio-Cortez fighting for democracy and transparency in Congress. Because Republicans sure as hell don’t care about either.