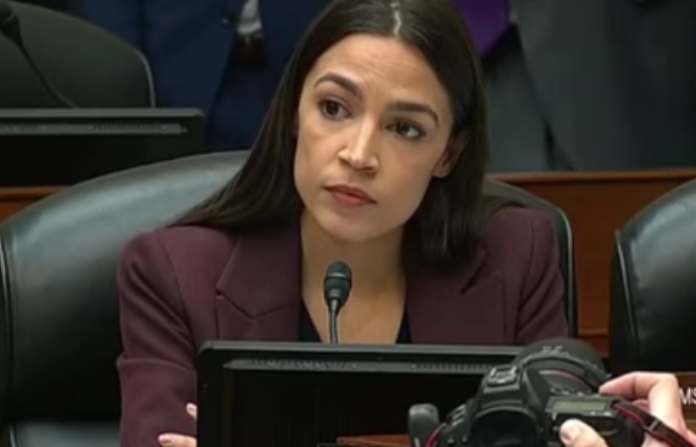 Rep. Alexandria Ocasio-Cortez (D-N.Y.) struck again in the fight against climate change on Tuesday by explaining why big banks should have to pay for damages caused by the fossil fuel industry, all while owning a conservative in the process.

During yet another hearing in Congress this week, the popular freshman congresswoman grilled Wells Fargo CEO Timothy Sloan and asked why the big bank, which helped fund construction of the project, shouldn’t be forced to pay for the clean-up of a future Dakota Access Pipeline spill.

“So, hypothetically, if there was a leak from the Dakota Access Pipeline, why shouldn’t Wells Fargo pay for the cleanup of it, since it paid for the construction of the pipeline itself?” she asked.

Sloan responded by passing responsibility to those who operate the pipeline.

Here’s the video of the exchange.

.@RepAOC @AOC: “So, hypothetically, if there was a leak from the Dakota Access Pipeline, why shouldn’t Wells Fargo pay for the cleanup of it, since it paid for the construction of the pipeline itself?”@WellsFargo CEO Timothy Sloan: “Because we don’t operate the pipeline.” pic.twitter.com/TqXQD0WGwA

AOC then took to Twitter to explain why it’s time for the money men backing these risky fossil fuel industry projects to take responsibility for disasters their money facilitated.

This, right here, is a problem.

Institutions can engage in unlimited financing of fossil fuels, building unstable pipelines + reaping profits, but when the bill comes to clean up oil spills & fix damages – they can conveniently kick the can.

So, who will pay for climate change? https://t.co/TlfmJKVwjb

Ocasio-Cortez argued that not only should the fossil fuel industry pay the tab, but the big banks funding them should also do so as well, which would make them think twice before investing in environmentally risky ventures.

Sea walls will have to go up as seas rise. Wildfires to put out. Roads repaved. Nascent technology to explore. Electrical grids replaced.

It’s too late for us to not have to deal w/ the impact of climate change. At this point we shouldn’t be debating IF we do it, it’s how.

The difference here is that we *already know* abt climate change.

It’s not an accident. It’s cause+effect. We knew DAPL would leak. And we know the next gen is in danger.

With the way things are structured now, if the banks don’t care, no one cares.

They’re simply not incentivized to – no matter the damage to people, families, and the environment.

We mostly address issues after the damage is done. But we can’t afford that w/ climate.
⬇️⬇️⬇️ https://t.co/9RZzN8txQC

A conservative Twitter user then posed a hypothetical scenario in which AOC is still a bartender and over-serves a drunk customer who then does something criminal under the influence of alcohol. If big banks are to be held responsible for oil spills and climate change, bartenders would be held responsible for drunk customers who murder someone. The user then warns that AOC will come after bartenders next.

The problem with that analogy is that there is a law in New York that does exactly that, as Ocasio-Cortez pointed out, humiliating yet another conservative hater in the process.

Actually, in NYC if you’re a bartender and knowingly over-serve to someone, you *ARE* liable for things they do after they leave the bar, because you knowingly put them at risk for $.

Its called the Dram Shop Act. It’s a big reason why bartenders cut people off. And it works. https://t.co/u2XMRuNOyb

The key here is in the advance knowledge. When you *knowingly* do something that you know *in advance* will do harm, and do it anyway, you open yourself up.

Companies *know in advance* that climate change will get worse if we keep growing fossil fuel consumption and production.

This is the perfect argument for why big banks like Wells Fargo should be forced to pay part of the tab for climate change and environmental disasters caused by fossil fuel companies.

The drunk customer is the fossil fuel industry and the bartender is the big bank. If big banks invest in these companies and help fund pipelines that leak, they should be held liable. When that happens, big banks would be forced to reevaluate their business dealings with the fossil fuel industry, which would result in banks not taking the risk, kinda like how banks won’t take a risk by giving a loan to someone with a low credit score.

Clearly, Ocasio-Cortez knows what she is talking about and her ideas should be adopted.