The massive wildfires burning in California have taken the lives of at least 77 people so far. Another 1,000 are missing. Experts say these fires are the most destructive in the history of the Golden State.

But according to Dave Johnson, chairman of the Columbiana (OH) GOP, blame for the wildfires can be placed on the political landscape in California. Johnson posted this on Facebook: 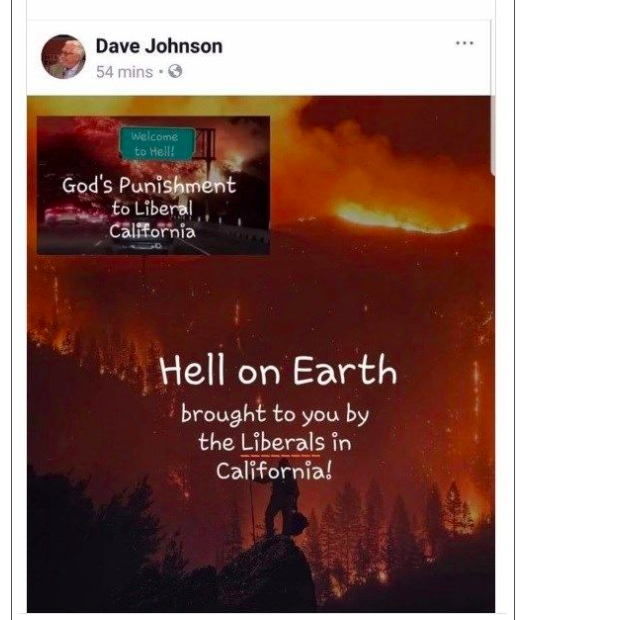 “I would say that Johnson should be ashamed of himself, but as he and the president he worships have proved time and again, they have no shame. Johnson owes the victims, their families, and the heroes who fought the fires and participated in rescue efforts an apology.”

When Facebook users suggested boycotting businesses owned by Chairman Johnson, he took down the meme post and issued a hateful statement to a local television station that read:

“California has been overtaken by liberals who have taxed and over-regulated the state. There are changes that could have been made which would have helped prevent the deadly fires had there been proper management of forests, but the timber industry is not allowed.”

President Trump said nearly the same thing in a tweet last week, accusing the state of “mismanagement” which had caused the wildfires to be more severe than usual. He also suggested over the weekend that “raking and cleaning” the forest floor would prevent fires, claiming he got the idea from the president of Finland. The Finnish leader later said he had never suggested anything of the sort.

However, Johnson is also convinced the entire matter is just a “Democratic stunt” and he told a reporter:

“It will eventually die out. They’re trying to make an issue out of it because they got their butts kicked in this election cycle.”