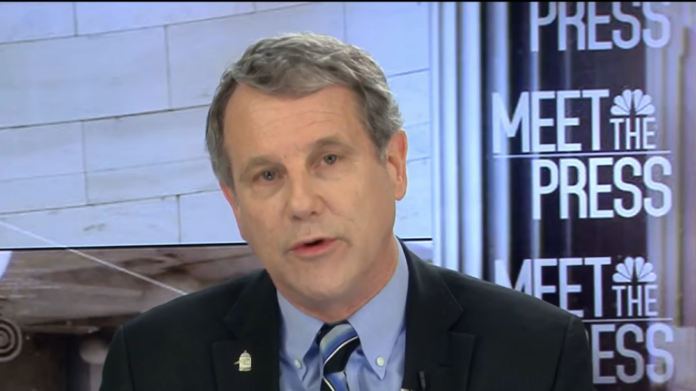 Senator Sherrod Brown (D-OH) said Sunday on “Meet the Press” that he believes President Donald Trump is a racist.

The issue of racism is again in the headlines this week with news that Virginia Governor Ralph Northam (D) had racist photos on his college yearbook page and admitted he had once imitated the late singer Michael Jackson while wearing blackface.

Brown told host Chuck Todd that the U.S. has never handled the topic of race in a good way:

“This country hasn’t dealt well with issues of race. We have a president who’s a racist.”

The Ohio senator, who may seek the 2020 Democratic nomination for president, was then asked by Todd if he thought Trump was a racist “in his heart.” Brown replied:

“I don’t know what ‘in his heart’ means. I know he built his political career knowing what he was doing in questioning the legitimacy and the birthplace of the president (Barack Obama) of the United States.”

Brown also noted the early history of Trump as it relates to his business dealings:

“There have been all kinds of news reports on what he did early in his career on housing. We know the president doesn’t tell the truth frequently. We know he lies frequently. And we know his racist comments and background.”

Trump made his debut on the political stage by calling Mexican immigrants “rapists” and drug dealers. He has repeatedly said a wall is needed between the U.S. and Mexico to keep out human traffickers and immigrants who tie up American women with duct tape:

“Women are tied up. They’re bound. Duct tape put around their faces, around their mouths. In many cases they can’t even breathe.”

And then there’s the aftermath of the racist right-wing rally in Charlottesville, where neo-Nazi white supremacists rioted and one of them killed an innocent counter-protester by running her over with his car. Trump maintained there were “fine people” on both sides of the protests.

Senator Brown is absolutely correct: Donald Trump is a racist. He’s also a sexist and associates with people who espouse anti-Semitic rhetoric.

It’s time we admit who is in the White House and what he represents. That’s the only way we can begin to deal with the underlying racism in this country that helped elect him.