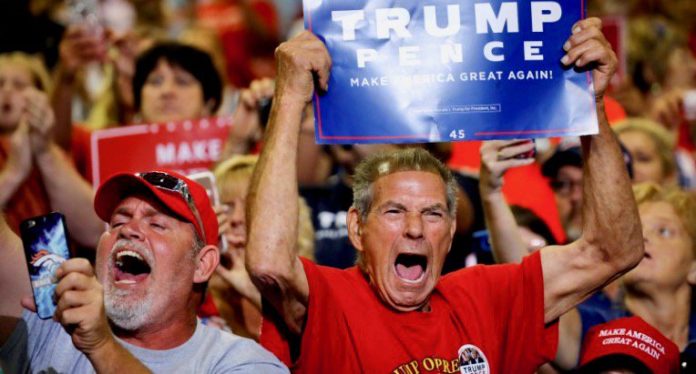 President Donald Trump held one of his rallies in Cincinnati, Ohio, Thursday evening, and many of those who attended defended the president’s racist rhetoric while also maintaining that they, too, are innocent when it comes to the issue of race and racism.

The Atlantic’s Elaina Plott reports that the crowd was warmed up by Donald Trump Jr., who declared:

“It’s sad,” he continued, “that using ‘racism’ has become the easy button of left-wing politics. All right? Because guess what? It still is an issue … But by making a mockery of it by saying every time you can’t win a fight—‘Oh! We’re just gonna push the button! It’s racist’—you hurt those that are actually afflicted by it. People hear it, they roll their eyes, and they walk on. And that’s a disgrace, and that’s what you’ve been given in the identity politics of the left.”

Most in the crowd agreed wholeheartedly with Junior.

“We’re all tired of being called racists. You open your mouth, you’re a racist. My daughter is a liberal, and she’s [using the word] all the time. We don’t talk politics; we can’t—all the time she always accuses me of hate.

Donald is not racist, you know? He makes a statement, and they take the words out of context and try to twist everything so that he’s a racist. And I think it’s gonna backfire.”

Roseanna had this to say about Trump and whether or not she was racist:

“He didn’t say nothing about the color of somebody’s skin.

Yes, apparently Trump acolytes believe that if you have biracial relatives, that insulates you from possibly being a racist. However, as we’ve learned with Trump himself, actions speak so much louder than words.

And Roseanna immediately destroyed her own deeply flawed defense when asked about Rep. Ilhan Omar (D-MN) and the “send her back” chant, again rushing to Trump’s defense:

“He apologized for that, so I think us as Trump supporters will respect him for that.

“Look, but she is gonna get—you know, I don’t want her stinkin’ Muslim crap in my country.

“She is a Muslim through and through …She wants that all here.”

The more Trump supporters try to deny their racism and bigotry, the deeper they dig their own hole of guilt to wallow in.