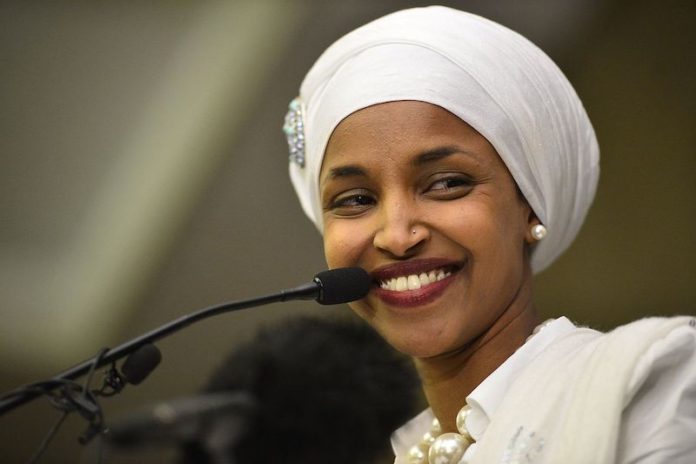 Fox News host Tucker Carlson got his a** handed to him on Wednesday by Rep. Ilhan Omar (D-Minn.) after he launched a vile racist attack against her and immigrants.

Omar is outspoken in her fight against discrimination and racism in America. And she’s not criticizing because she hates this country, she criticizes because she loves it and believes it can and should be better.

But Carlson, whose viewers include white supremacists, threw a racist hissy fit aimed at her on Tuesday night and suggested immigrants are “dangerous” for our country.

“Omar isn’t disappointed in America. She’s enraged by it,” Carlson said. “That should worry you, and not just because Omar is a sitting member of Congress. Ilhan Omar is living proof that the way we practice immigration has become dangerous to this country.”

“Maybe that is our fault for asking too little of our immigrants,” he continued. “We aren’t self-confident enough to make them assimilate so they never feel fully American. Or maybe the problem is deeper than that. Maybe we are importing people from places whose values are simply antithetical to ours. Who knows what the problem is but there is a problem and whatever that cause this cannot continue. It’s not sustainable.”

“No country can import large numbers of people who hate it and expect to survive<‘ he concluded. “The Romans were the last to try that with predictable results. So be grateful for Ilhan Omar, annoying as she is. She’s a living fire alarm, a warning to the rest of us.”

She “is a living fire alarm. A warning to the rest of us that we better change our immigration. Or else” pic.twitter.com/p2IQWsqP5Q

First of all, immigration did not cause the fall of the Roman empire. A lot of other problems such as outside military attacks, inequality, and terrible leadership combined to do that. Racists like Carlson falsely use Rome as an example to advance their agenda, which includes a deep hatred for anyone who isn’t white.

Forcing immigrants to “assimilate” is un-American, especially since many cultures have shaped our nation since its birth. We are a nation of immigrants. Even Carlson’s own ancestors migrated here.

Also, Tucker is obsessed with Omar because he launched this same attack just two months ago.

In response, Omar laughed at Carlson and wiped the floor with his racist snowflake tears.

Not gonna lie, it’s kinda fun watching a racist fool like this weeping about my presence in Congress 🤣🤣

No lies will stamp out my love for this country or my resolve to make our union more perfect.

They will just have to get used to calling me Congresswoman! https://t.co/nRS13yWivK

This country is better because of people like Omar who stand against injustice and are not afraid to call America out. Our country is not perfect, and won’t improve if people are too scared to criticize it. What Carlson is really upset about is that she’s calling out the systemic racism that has plagued our country for centuries. Racists enjoy the status quo and want to make things worse. But Omar and a majority of Americans see a better America that moves past hate and racism and into a future free of it.

That will make us stronger than racists like Carlson ever will.