The United States Blues
Home News Once loyal supporters slam Trump for shutdown: ‘You’re not getting the wall’ 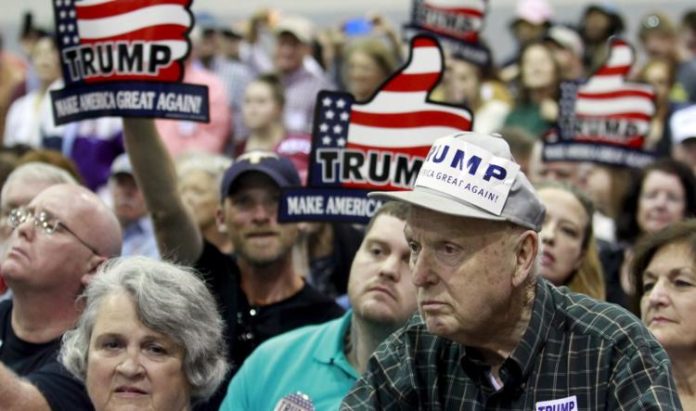 The very supporters who helped Donald Trump win the 2016 presidential election are now turning on him for the endless government shutdown and demand for a border wall, according to a new report from the Washington Post.

The Post sent a reporter to Michigan, one of the states that helped Trump score a slim victory in the electoral vote over Democratic challenger Hillary Clinton, and many of them sounded downright apoplectic when the discussion turned to the shutdown.

“What the [expletive] were we thinking?

“It’s silly. It’s destructive. I was certainly for the anti-status quo. … I’ll be more status quo next time.”

Daudert added that he won’t be voting for Trump if he runs for re-election in 2020, and that could be an ominous sign for a president with historically low approval ratings.

Trump voter Jeremiah Wilburn echoed Daudert’s disgust with the president and his shutdown:

“I was doing fine with him up until this government shutdown.

“It’s ridiculous. You’re not getting the wall built for $5 billion. And Mexico is not paying for it, we all know that, too.”

“The government shutdown has caused skittishness among parts of Trump’s base, which has been one of the most enduring strengths of his presidency. An NPR/PBS NewsHour/Marist survey, conducted Jan. 10 to Jan. 13, found that his net approval rating had dropped seven points since December.

“One of the biggest declines came among suburban men, whose approval rating of Trump fell a net 18 percentage points, while support from evangelicals and Republicans dipped by smaller margins. Among men without a college degree, the downward change was seven points.”

Trump voters in Michigan are also worried that a recession may be on the horizon, with Matt DeVuyst, a 62-year-old electrician, remarking:

“Times have been good. But things are slowing down a bit. If they don’t find common ground with China, who knows? We’re stable but nervous. It’s the fear of the unknown.”

Erica McQueen voted for Trump, but conceded that she hasn’t been happy with his decisions of late:

“The wall is getting out of hand. It’s too much. It’s ridiculous. I’m sick of seeing it, I’m sick of hearing about it.

“Something miraculous has to happen for me to vote for him again.”