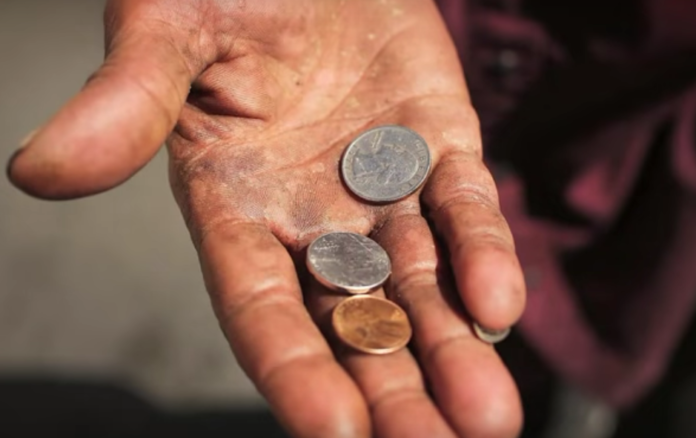 Republicans are often accused of hating poor people. But it becomes pretty clear that they do when they openly admit to it, just as a group of Colorado Republicans did on Twitter this week.

In what has to be one of the biggest social media blunders Republicans have ever committed, the Alamosa County Republican Party literally said that “Republicans hate poor people” and said people should have “self-respect” by being a Republican. 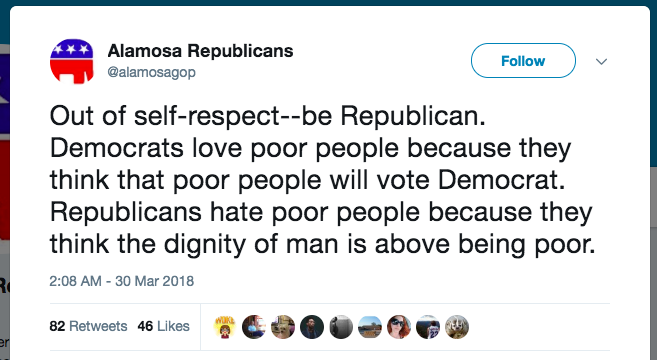 Predictably, backlash ensued. And Alamosa Republicans scrambled to do damage control, which included an apology on Facebook complete with focusing the blame on a single individual in the hopes that people won’t blame the party.

Indeed, actions do have consequences, which is why Alamosa Republicans are still getting hammered for the post on Twitter despite it being removed.

Get ready for the #BlueWave2018 Guess what, the POOR people get to vote too!! How cool is that?!

Jesus loved the poor. What’s wrong with you?

Is it true you hate poor people?

WHOA. The official Twitter account of the Alamosa County GOP in Colorado flat out admitted that “Republicans hate poor people.”

Even though this is an awful thing to say, it’s also the most honest statement we’ve heard from Republicans in a long time. pic.twitter.com/akFm5w3IaF

The Alamosa Republican Party wants you to be the first to A/B test their slogan for the 2018 elections! Lucky you! Here it is:

“A gaffe is when a politician tells the truth – some obvious truth he isn’t supposed to say.” – Michael Kinsley. Example: “Republican hate poor people” ~ Alamosa Republicans.

I’d ask what in the hell is wrong with you people, but I really don’t have the time for an extensive list.
I pity Alamosa County Republicans – they have lost touch with humanity and reality.

The state of Colorado currently ranks twelfth in overall poverty rate according to 2017 statistics.

This tweet could have devastating results for Republicans in Alamosa County, especially since the county has overwhelmingly voted for the Democratic candidate in presidential elections going all the way back to 1916, with the exception of the 1940 and 1996 elections.

It could even hurt Republicans statewide, which could affect national elections since Colorado is often considered a swing state. Forty-three million Americans currently live in poverty, and now all of them know for sure which party hates them. Less than half of America’s poor voted in 2012. Just imagine if that number increases because of this GOP blunder.

But let’s a be honest, it’s not like Republicans have not expressed their disdain for the poor before.

Republicans routinely wage war on food stamps, school lunches, healthcare, and just about any other program that benefits poor residents.

President Donald Trump’s administration has been particularly hostile to poor Americans. Not only has Trump given wealthy individuals and corporations massive tax cuts at the expense of most taxpayers, he has proposed cutting heating assistance for poor people, and Attorney General Jeff Sessions literally wants to send people to prison just for being poor.

So, with this message on Twitter, Republicans are not only saying they hate the poor through their actions, they are now saying it out loud.