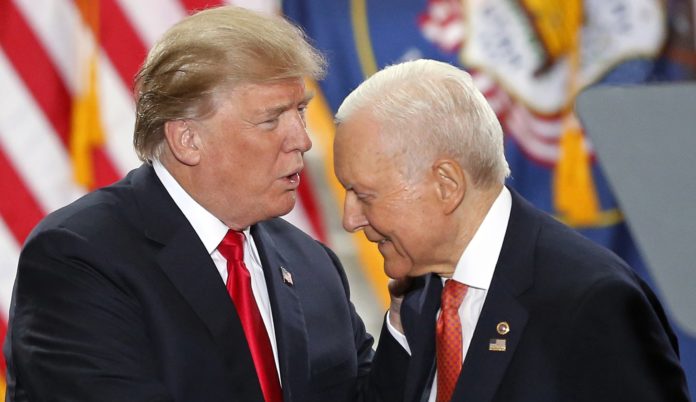 In the latest glaring example of Republican cowardice and hypocrisy, Utah GOP Senator Orrin Hatch is proudly declaring that he doesn’t care if President Donald Trump broke the law.

Hatch was asked by reporters about the recent court filings which implicate Trump in multiple felonies. He initially tried to suggest the entire matter had been created by Democrats:

“The Democrats will do anything to hurt this president.”

Here’s the problem with that deeply flawed logic: The U.S. Attorney for the Southern District of New York was appointed by Donald Trump and isn’t a Democrat. The most troubling allegations against the president have been made by prosecutors in the Southern District. When that was pointed out to Hatch, he responded:

Perhaps we shouldn’t be surprised that Senator Hatch is this comfortable with crime and criminal behavior. After all, this is the same man who defended Brett Kavanaugh for allegedly assaulting Dr. Christine Blasey Ford, suggesting that the judge was a fine person and belonged on the Supreme Court:

“I think it would be hard for senators to not consider who the judge is today. That’s the issue. Is this judge a really good man? And he is. And by any measure he is.”

And Hatch was far from done running interference for Trump, also telling reporters:

“I don’t think he was involved in crimes, but even then, you know, you can make anything a crime under the current laws; if you want to you can blow it way out of proportion, you can do a lot of things.”

Yeah, it’s really no big deal at all when you pay hush money to women so the American public won’t know what a skeevy weasel you are in the final months of a contentious presidential campaign. What right do voters have to know that you’re a disgusting reprobate who cheats on his wife just months after she gives birth to your son?

Just last year, Hatch’s own hometown newspaper, the Salt Lake Tribute, destroyed him with an op-ed in which they cited his “utter lack of integrity that rises from his unquenchable thirst for power.”

Just like most of his fellow Republicans, Orrin Hatch is a hypocrite, an enabler, and a pathetic suck up. Instead of being a patriot, Senator Hatch has decided to be a slimy sycophant. History will not be kind to him.