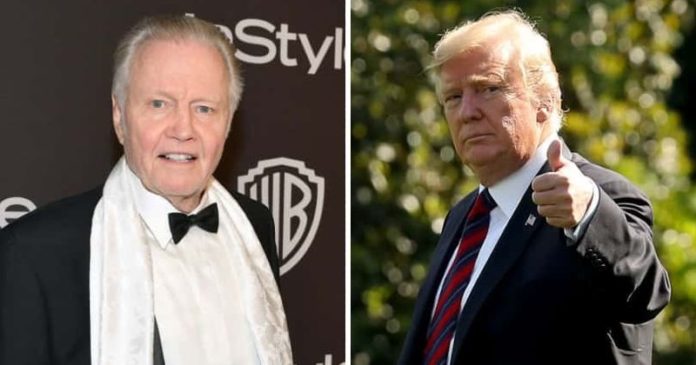 On Friday, Oscar-winning actor Jon Voight (who also happens to be actress Angelia Jolie’s father) posted two videos on Twitter Friday in which he lauded President Donald Trump as the best American president since Abraham Lincoln.

Yes, you read that correctly: Best president since Lincoln, who led the country during the Civil War and kept the republic from disintegrating.

In one of the videos, Voight comments:

“This job is not easy, for he’s battling the left and their absurd words of destruction,” Voight. Our nation has been built on the solid ground from our forefathers, and there is a moral code of duty that has been passed on from President Lincoln.”

To my fellow Americans. Part 1. pic.twitter.com/srw4zXCRKJ

Wait, it gets even more absurd:

“Our country is stronger, safer and with more jobs because our president has made his every move correct. Don’t be fooled by the political left because we are the people of this nation that is witnessing triumph.

“Let us stand up for this truth: that President Trump is the greatest president since Abraham Lincoln.”

To my fellow Americans. Part 2. pic.twitter.com/uhqpbzwHhS

This isn’t the first time Voight has compared Trump to Honest Abe, according to CNN:

Speaking at an inauguration rally in January 2017 on the steps of the Lincoln Memorial in Washington, Voight said, “God answered all our prayers” by granting Trump the White House.

“And President Lincoln, who sits here with us,” Voight said, “I’m sure is smiling knowing America will be saved by an honest and good man who will work for all the people, no matter their creed or color.”

Haven’t you got an empty chair you can talk to? The vile bigot in the White House is concerned only with enriching himself, and pandering to evangelicals who are eroding the civil liberties of women and LGBT people. He, and you, are contemptible

Hang tight Jon, I’m alerting the one last human who gives a shit what you have to say! pic.twitter.com/Vgflxpseh9