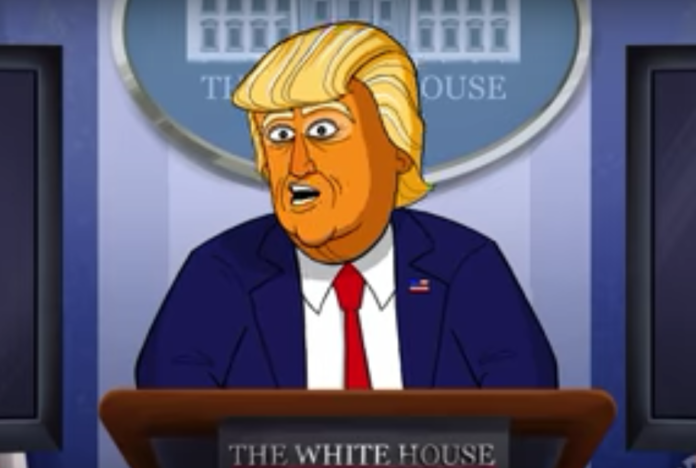 As we all know, Daniels is suing Trump to void a non-disclosure agreement she signed to keep her silent about an affair the two had in 2006.

Earlier this month, Daniels appeared on 60 Minutes and revealed details about their relationship, including that Trump likes to be spanked and that he compared Daniels to his daughter, Ivanka.

But the strangest part of this scandal is the deafening silence from Trump, who has not taken any shots at Daniels on Twitter since news of the scandal broke. And that’s really suspicious because Trump usually has no problem with attacking people.

This has led to speculation that Trump is scared Daniels has something on him he doesn’t want to see made public.

So, the Showtime series “Our Cartoon President” addressed what that something is this week.

The cartoon Trump appeared during a press conference to discuss the scandal, starting with Daniels’ interview with Anderson Cooper.

“Spring has sprung,” toon Trump said. “All winter long, adult film stars have been hibernating — bellies full of fish — now they’re all emerging from their caves and giving interviews to Anderson Cooper.”

“Sir, why haven’t you refuted the Stormy Daniels allegations,” a journalist in the press corps wanted to know.

Toon Trump responded by saying he doesn’t want Daniels to release any pictures of his penis:

“I’m trying to take the high road and do everything I can not to have a picture of my penis go public. I mean, that thing is like a vampire. Bloodless, can’t see it in a mirror. And at first Eastern European women fall in love with it, but eventually they try to drive a wooden stake through it.”

When asked why he is having trouble finding attorneys to represent him, Trump denied it and introduced a new lawyer with a very shady background, suggesting Trump is desperate enough that he will literally hire anyone to represent him.

As Trump continues to remain silent, the scandal will only get worse. But Daniels having something like pictures and/or video would explain why Trump is refraining from pissing her off. An attack on Twitter could provoke Daniels and put Trump in an even deeper hole. After all, he can’t deny the affair happened if Daniels has pictures and videos to prove it. And having pictures of his penis and video of the affair out there for all to see would surely be the tipping point for evangelicals who have supported Trump so far.