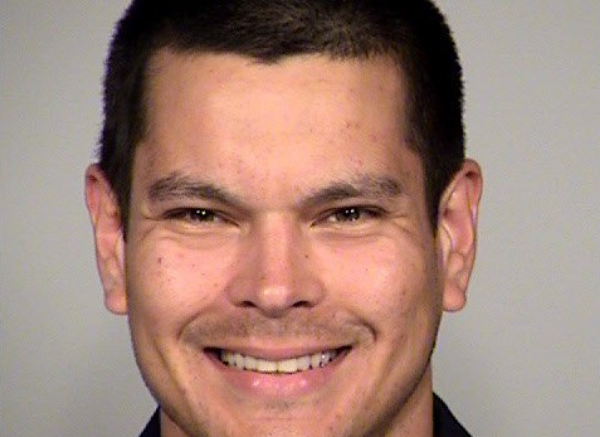 Texas police officer Matthew Luckhurst won his job back after an arbitrator ruled in his favor earlier this month over a mere timing technicality. And the Internet is justifiably horrified.

The cop committed a vile and inhumane act while on the job in 2016 by interfering with a religious organization’s effort to feed the hungry in San Antonio.

According to The Daily Mail:

San Antonio Police Officer Matthew Luckhurst somehow managed to keep his job after the disgusting incident which saw him pick up some dog poo, place it onto a piece of bread before placing the ‘sandwich’ in a Styrofoam container of a ‘half-eaten meal’ provided by a local religious group for the San Antonio homeless.

The officer managed to keep his job after a date discrepancy led an arbitrator to overturn his dismissal enabling him to get off on a technicality arguing that the incident fell outside the window for allowing him to be indefinitely suspended, and an arbitrator agreed with him earlier this month.

Luckhurst was rightfully dismissed from the department after discovery of his behavior, but will now be back on the streets because it turns out “the indefinite suspension is overturned due to the violation of the 180-days prohibition” because the misconduct occurred a little earlier than reported.

This isn’t the first time Luckhurst has been suspended. In fact, he’s been suspended at least two other times, once for failing to arrest someone on a warrant, and a second time for taking a dump in a women’s toilet and refusing to flush it and spreading fecal matter on the toilet seat.

Seriously, he’s not only a bad cop, he’s a sick and demented cop.

And Twitter users expressed outrage by the arbitrator’s decision.

Cop unions, for the win.https://t.co/6UJfa5rCQC

Cop who gave feces sandwich to homeless person wins appeal for his job https://t.co/pbfdkdRchv via @MailOnline #MatthewLuckhurst seems to either have a fetish for poop or is mentally a 6 year old that never grew up 💩 he should’ve been punished with eating his own feces sandwich

Matthew Luckhurst, this pig should be in jail not getting his job back https://t.co/9vCv717R4f

#matthewluckhurst This is repulsive!! This immature, sick, twisted, spoiled-ass frat boy does not deserve a badge or a paycheck. 2 incidents involving feces. WTF.

This kind of technicality would not apply to someone who is not a police officer. Sure, there are statutes of limitations for a variety of crimes but this officer was rightfully fired for proven misconduct in uniform. Now he gets to continue disgracing it and terrorizing the people he is supposed to protect and serve. At least Las Vegas doesn’t have this kind of problem.

But this is just more proof that if you want to be a complete asshole and lawbreaker, just become a police officer. Then you can hide behind a badge and the normal rules and laws don’t apply to you.

ABOUT US
Lefties, Liberals, Progressives, Social Justice Warriors, Old Hippies, Concerned Millenials, Reformed Republicans and Democrats of Whatever Stripe – Welcome Home! We offer aggregated news – which means our writers credibly source and report on the news of the day. In all fairness, our team leans left and may editorialize from time to time but we are committed to giving you the facts. No tin-foil hat conspiracy theories here! Our Activism Resource Database is second to none and covers the spectrum from Animal Rights to World Peace (there were no categories that begin with Z). We make every effort to give you the most current information on ways you can make a difference. Whether you are an Armchair Activist or Full-Blown Social Justice Warrior we have something for you.
Contact us: [email protected]es
FOLLOW US
© 2019 TheUnitedStatesBlues.com