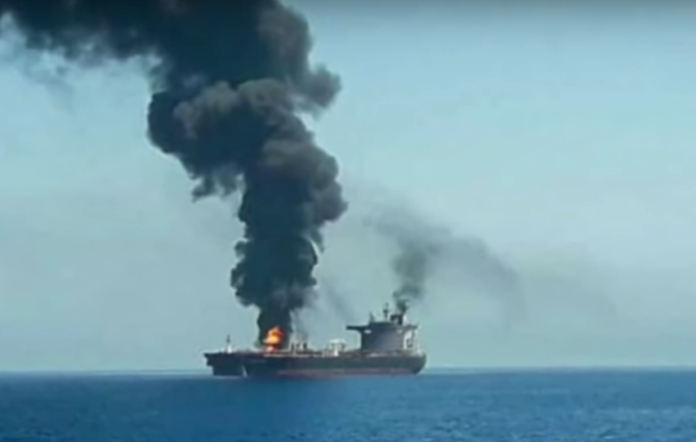 As the Trump administration desperately tries to steer the United States into a war with Iran by accusing the Middle Eastern nation of attacking an oil tanker near the Strait of Hormuz. But the Japanese owner of the vessel is contradicting the American account.

Secretary of State Mike Pompeo says that Iran is responsible for the attacks on the oil tanker, setting the stage for Trump to have an excuse to drag our nation and war-weary troops into what would truly be a bloody new Vietnam War.

US Central Command claims that Iran used limpet mines to attack the ship. Limpet mines are magnetic and are used to disable ships, but not destroy them. Video footage shows an alleged “Iranian” boat supposedly removing the evidence of the attack.

Of course, there’s no evidence that a limpet mine was used. And the boat shown could merely be coming to the aid of the ailing oil tanker. Not only that, this would not be the first time Trump and his team have used old video footage to make a claim.

Iran has strongly denied involvement, and has condemned the United States for escalating tensions.

“The U.S. economic war and terrorism against the Iranian people as well as its massive military presence in the region have been and continue to be the main sources of insecurity and instability in the wider Persian Gulf region and the most significant threat to its peace and security,” Iran said in a statement.

While the American account blames Iran and claims a limpet mine caused the explosion, the Japanese owner of the tanker contradicted it and denied that a mine attack occurred, going on to note that crew members saw “flying objects” prior to the explosion.

Company president Yutaka Katada said Friday he believes the flying objects seen by the sailors could have been bullets. He denied any possibility of mines or torpedoes because the damage was above the ship’s waterline. He called reports of a mine attack “false.”

Katada said the crew members also spotted an Iranian naval ship nearby, but didn’t specify whether that was before or after the attacks.

The description makes it sound like maybe a small missile or rocket hit the ship instead. And one has to wonder how far Trump and his cronies would go to lie America into a major war against Iran.

The United States cannot afford to get involved in yet another costly and bloody war, especially against an opponent who is far stronger than Iraq and Afghanistan ever were. No one has been killed by these so-called attacks and no Americans have been harmed, except for maybe a wealthy investor’s wallet. That’s not a good enough reason to start a war. The United States has been at war for nearly 20 years now. And we all know how the Bush administration lied us into a war with Iraq. Current National Security Adviser John Bolton also served in that administration. He sought war with Iraq then. And he is seeking war with Iran now for any reason.

The American people must demand absolute proof that Iran is behind these attacks. Trump’s word is not nearly enough. He is a proven liar and so are his cronies. Besides, he’s the one who started the escalation of tensions in the first place by withdrawing from the Iran nuclear deal and re-issuing crippling sanctions even though Iran has never violated the terms of the agreement.