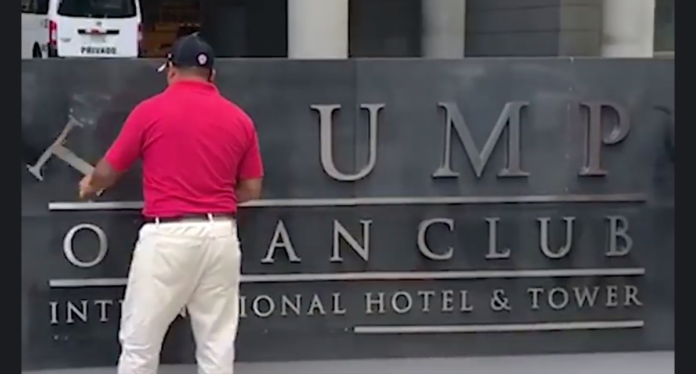 The first tower built outside the United States to carry the name, “Trump” on it erupted into a dramatic 12-day clash between Trump Hotel executives, property owners, the Panamanian police, and eventually government officials and judges.

The officials stepped in to resolve the dispute and ousted Trump executives. One Trump security official was reportedly take off the property in handcuffs, and the victorious majority owner played a Greek song, “Accordeon,” celebrating the overthrow of a fascist regime on the piano in the lobby.

“This is the government of Panama, a U.S. ally, basically working against the private business interest of the U.S. President, who owns that company that managed the hotel.”

The owners tried to fire Trump’s company last year, but they refused to leave, citing a binding contract.

“They have no right to forcibly remove Trump Hotels as manager.”

The company said they say efforts to remove them were:

The Trump branded building opened in 2011, with the Trump executives managing the building – without ownership. Orestes Fintiklis, head of the hotel’s owners’ association, had signed an agreement with the Trump Organization to manage the building. But when the deal closed in August, Fintiklis decided it was time to part ways with Trump.

The brand was now toxic and costing the hotel revenue. Orestes wrote to his fellow hotel owners in a January email obtained by the AP, that:

“Our investment has no future so long as the hotel is managed by an incompetent operator whose brand has been tarnished beyond repair,”

You can see Fintiklis make an additional statement below:

Fintiklis and Trump executives began sparring when he brought a termination notice to the Trump management team on February 22. Although he was the majority owner, the hotel officials wouldn’t let Fintiklis check in to any rooms.

He filed a legal complaint, which stated that he and those accompanying him had seen Trump’s team destroying hotel documents. The Trump officials denied the accusation.

The situation deteriorated into a skirmish between Trump security officials and the condo owners’ association’s guards. However, when Panamanian authorities stepped in, the Trump hotel management left quietly. Fintiklis said:

“Today Panama has made us proud.”

Fintiklis is based in Miami but indicated he may seek citizenship in Panama.

The skirmish ended with a content Fintiklis playing the piano, and the Trump name being removed from the signage in front of the building.

Watch him play below:

Watching this employee chip away at the Trump sign is strangely satisfying, don’t you think? (see below)

The building’s history has long been a subject of extreme controversy for the Trumps. It is considered a “money laundering hotspot” attractive to Russians with dirty money according to investigations by Monte Friesner, a financial Intelligence analyst.

Investigative journalist, Richard Engel, reported on the building in November 2017 and noted how the Trump brand was tarnished by the reputation for criminal activity. The Trumps remained detached from the illicit activity by claiming the developers had the responsibility to vet condo buyers in the building. They merely allowed the use of the Trump name.

How convenient, and it allows them to turn a blind eye. Richard Engel said:

” […] This building was a magnet for dirty money, and we found no sign of an attempt by the Trump organization to protect that brand, which is perhaps now our nation’s most prominent brand from being tarnished by association.”

The Trump “Ocean Club,” as it was called, was the first project that Ivanka Trump led from inception. Her father was inspired to build in Panama after hosting the Miss Universe pageant in Panama.

After that, Trump said:

“I fell in love with the place.”

If that sounds familiar to the scenario in Russia, it should, except the Trump Tower Moscow never materialized. Now it appears they have been forcibly ousted from control of the only Trump building in Latin America.

See more about how the Panama Trump “Ocean Club” is a hotspot for money laundering for criminals such as the Russian mafia below:

Watch the skirmish that erupted below:

See more from MSNBC below: