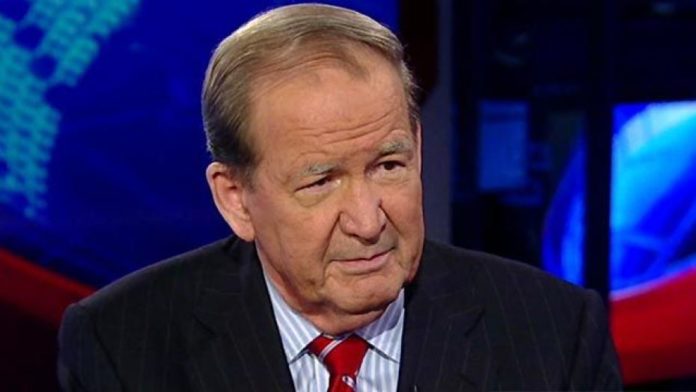 Longtime right-wing extremist Pat Buchanan said Thursday that even though African-Americans have been in the country since the 1600s, they still have yet to “full assimilate” in the United States.

Appearing on Laura Ingraham’s podcast, the former Reagan adviser who ran for the GOP presidential nomination in 1992 and 1996, Buchanan and Ingraham were discussing the issue of immigration, with Ingraham commenting:

“We give 1.3 million green cards, which I think is way too many, every year in the United States. Most Americans polled say — think it’s either — keep it the same, or lower the number.”

“Well, the point is, in these — 90 percent of these are folks coming from what you might call the second or the third world. And people are, you know, people are fundamentally, basically good, but there’s no doubt there’s a greater difficulty in assimilating people from different civilizations and cultures and ethnicities and races in the United State, than there — than other folks.

“And we know this is true, African-Americans have been here since 1619. They’ve helped build and create the nation. They’re part of its culture and history, and yet we haven’t fully assimilated African-American citizens.”

And when Ingraham began bemoaning allowing immigrants into the country, it quickly became clear what the real fear of those who oppose immigration truly is. Ingraham told Buchanan:

“Well, here’s what we know for sure. We know that at this clip, America as we know her today will be completely transformed, which is, I think, their goal.”

“The Republican Party will be finished.”

Ah yes, there’s the real reason Republicans are so keen on keeping the United States as white as possible: They fear losing political power. Ingraham quickly agreed with her guest:

“Yeah, the Republican Party will be done. So, most of Central America will have moved to the United States, and Mexico, people will just come and go, but — although, it’s easier to deport people to Mexico.”

Make no mistake, Donald Trump and Republicans aren’t opposed to immigration on national security grounds. Their motives are racism and a desperate attempt to cling to power.

But the GOP is fighting against the inexorable demographic shifts of this country and the world, and the sooner they’re destroyed as a political party, the better.