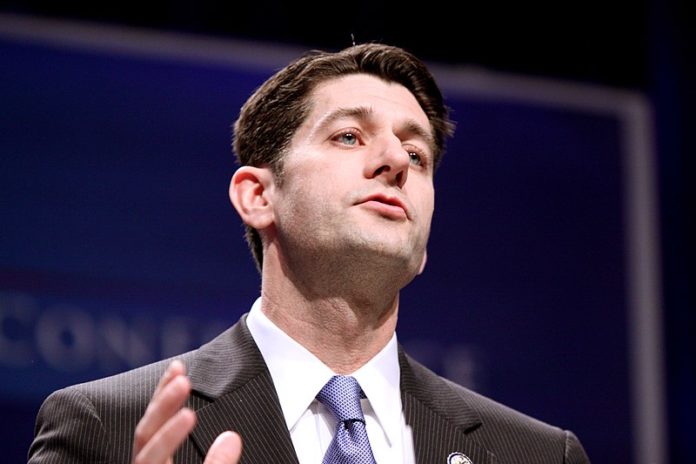 Outgoing House Speaker Paul Ryan blamed billionaire Democratic donors for his party’s loss of the House this midterm election, only to be called out for being a hypocrite by economist Paul Krugman on Twitter.

California Republicans are currently refusing to blame President Donald Trump for the severe shellacking they took on November 6th which resulted in Democrats taking every House seat in Orange County away from Republicans, who had held most of those seats in the GOP stronghold since Ronald Reagan’s presidency.

Trump’s behavior, election stunts and failure to talk about issues that matter most drove high turnout in the liberal state. But rather than admit that Trump cost them their seats, they would rather blame Democratic donors.

During an interview with the Washington Examiner, Ryan echoed their whining:

“There were a lot of seats in California we should have won and we got massively outspent,” Ryan said. “If you’ve got a couple of billionaires dropping $100 million on your head, that leaves a mark.”

Money helps, but grassroots operations on the ground and energizing and getting voters to the polls is more important.

And the GOP had less money, less energized voters, and a poor ground game. They also had a liability named Trump crisscrossing the country spewing insults and violent rhetoric, resulting in a resounding Democratic victory.

Economist Paul Krugman, however, did not argue about the cause of the Republican defeat. He was more interested in Ryan’s hypocrisy regarding billionaires donating to Democrats.

Indeed, this complaint comes from a man whose party is funded heavily by billionaires like Sheldon Adelson, the Koch brothers, Woody Johnson, Joe Ricketts, and Peter Thiel, all of whom have spent hundreds of millions of dollars on Republican campaigns in recent years, including 2018.

I didn’t exactly see this coming: Republicans blaming their midterm shellacking on the nefarious influence of billionaires 1/ https://t.co/vQtjHkWsBK pic.twitter.com/Wwdck6f0Gb

I found this article with a Google search, which looked like this 2/ pic.twitter.com/2djFewbrYB

Meanwhile, I’ve been reading a really interesting new political science book, which tells us that billionaires are, in general, very conservative and mostly back right-wing politicians and causes 3/ https://t.co/iVOjlLBiiL pic.twitter.com/8qVkD34Icn

For the most part, however, they do it quietly, because their positions are so unpopular. The relatively small number of liberal billionaires, by contrast, wear their political hearts on their sleeves 4/

What’s worth noting, however, is that we’re seeing another illustration of the right’s bottomless cynicism. They’ll use any tool at hand — even class envy! — in order to win lower taxes and less regulation 5/

Ryan’s hypocrisy is also stunning seeing as how Republicans voted to give billionaires a massive tax gift in 2017, which many liberal billionaires promptly donated to Democratic campaigns so that the tax cut can be reversed.

The bottom line is that Democrats did not win because a few billionaires donated to their campaigns. That would be like saying Republicans like Ted Cruz and Rick Scott only won their races because of conservative billionaires donating to their campaigns. Republicans were not only hampered by an unpopular president in a liberal state, they neglected those Orange County districts because they believed they would be automatic wins they would not have to work to keep.

Clearly, they were wrong. And now they are desperately trying to find a scapegoat to blame for their humiliating losses rather than take responsibility.