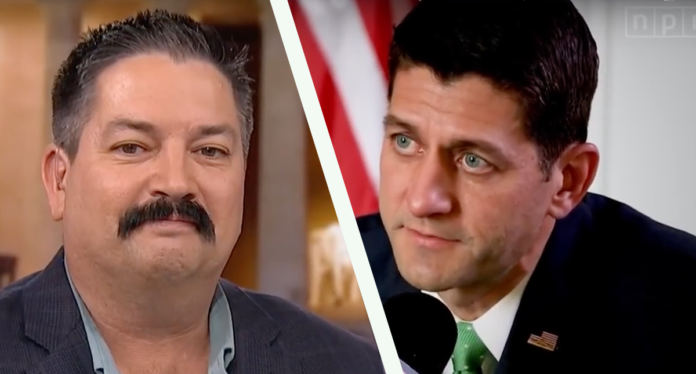 A Democratic challenger for Speaker of the House Paul Rayan’s (R-Wis.) position, Randy “Ironstache” Bryce appeared on Hardball with Chris Matthews, where he made a convincing argument that Ryan can’t relate to the struggles of average Americans.

After Matthews discussed Ryan’s sycophantic allegiance to Donald Trump, Bryce made note of Ryan’s worst sociopathic urges to do away with the safety nets of Social Security. Ryan literally dreams of denying health-care coverage to millions of low-income and elderly Americans, since his college days.

Most ironically, Ryan, who at age 16 tragically found his father’s body after he died, collected Social Security survivor’s benefits that would help him pay for his attendance at Miami University.

Bryce wasted no time in calling out Ryan’s monumental hypocrisy:

Matthews: Tell me about your pitch against him. how are you going to beat him? You have about three minutes here.

Bryce: We’ve seen what happens with 20 years of Paul Ryan being in Washington, D.C. the policies that has been passed and aren’t doing anything to help the people of our district. He has been cozying up to billionaires, lobbyists, special interests and things like this tax scam saying we can’t afford social security, Medicare and Medicaid after just giving $1.5 trillion to people who don’t node $1.5 trillion.

Matthews: He is going after Social Security, Medicare and Medicaid. I always thought he didn’t like those programs. he is an ideologue. He doesn’t like that stuff.

Bryce: These are the things that helped him get to where he is. and now he wants to cut it for everybody else.

Matthews: What has he benefited from personally?

Bryce: Well, his father passed away and he used social security to get through college.

Bryce: And now these things he wants to take away from everybody else without giving them any credit for his success.

“The late Governor of Pennsylvania said, ‘When you get old and sick, all you’ve got is your family, God, and your health insurance. I don’t think Ryan understands that.”

Randy Bryce just received a major fundraising boost and standing as a top-tier candidate from the Democratic party, winning a spot on the “Red to Blue” program, which will give him a significant edge in this year’s election.

We wish Bryce and challengers to Speaker Ryan the best. It’s high time Ryan take a hike with his agenda of harming the vulnerable, the sick, and the old in America.

See Bryce appear on Hardball below: