The United States Blues
Home Politics Congress Paul Ryan tries to make fun of AOC and gets dealt a... 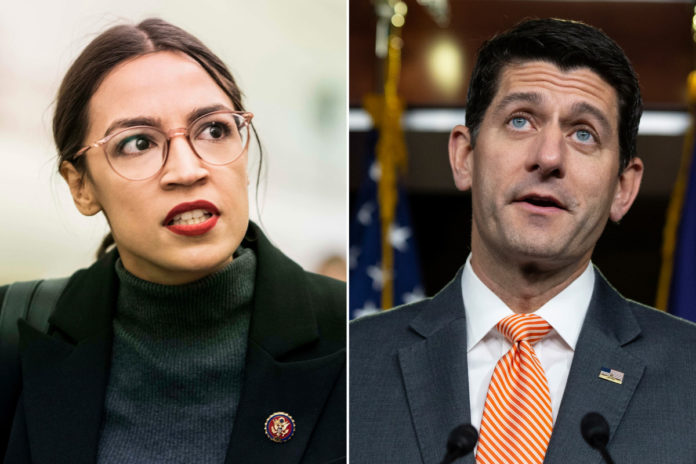 We’ve heard nothing from former Speaker of the House Paul Ryan (R-WI) since he left Congress, and judging by what happened to him on Wednesday, he probably wishes he had remained off the radar screen for a little while longer.

“In an interview Tuesday night at the annual dinner for Forward Jainesville, a community organization based in his hometown, Ryan quipped that he thought (Alexandria) Ocasio-Cortez (D-NY) had ignored his advice while revealing that he had met the New York congresswoman after her election victory last year.

What did Ryan tell AOC? He told her to remain invisible and not ruffle and feathers:

“I talked to her, AOC — everybody calls her AOC … She’s the youngest person now there. I gave her just a few little tips on just being a good member of Congress, new. I don’t think she really listened to a thing I said,” Ryan said, to laughter from the audience.

“Take it easy, just watch things for a while, don’t ruffle any — see how it works first.”

Just the fact that Ryan would see fit to give AOC advice she probably didn’t even ask for, it seems a bit presumptuous of him to offer his thoughts on how to react as a member of Congress.

Not long after Ryan’s comments hit the internet, he got dealt a big dose of social media karma, and we can only hope this will discourage the former Speaker from opening his big mouth anytime in the near future:

You know what’s better than Alexandria Ocasio-Cortez not listening to a thing Paul Ryan said?

The fact that none of us have to listen to a single thing he says ever again.

Even conservatives secretly admit at D.C. cocktail parties that Paul Ryan was the worst Speaker in recent history and maybe all-time. The idea that @AOC should sit at his feet, kindergarten style, eagerly awaiting his wisdom, is beyond laughable.

Paul Ryan is complaining that Alexandria Ocasio-Cortez hasn’t taken his advice about how to conduct herself as a new congresswoman.

Paul, it may be because you were the worst Speaker of the House in history. If someone flunks a class, you don’t ask to copy their notes.

Somebody tell Paul Ryan you can’t soul search without a soul to search in.

Somebody tell Paul Ryan you can’t soul search without a soul to search in.

It takes a special kind of arrogant man to assume that any advice he gives is wanted and should be revered/followed without question. Paul Ryan must feel his irrelevance solidifying if he’s complaining about nonsense like this.