The United States Blues
Home News Peggy Noonan Blasts Trump For Bowing Down To The Saudis In Scathing... 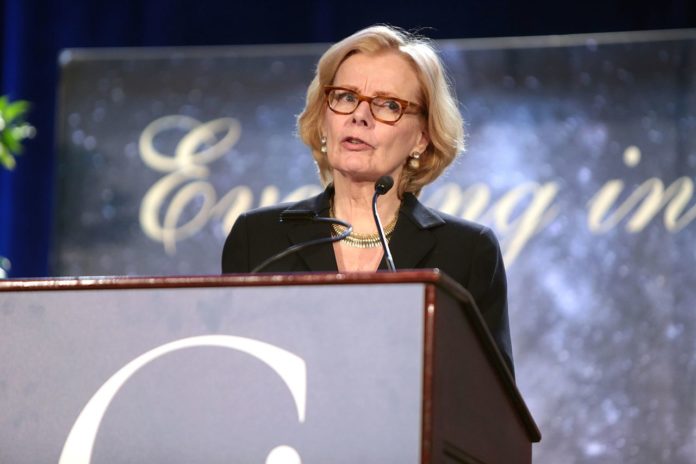 When Washington Post journalist Jamal Khashoggi walked into the Saudi Arabian consulate in Turkey earlier this month, he never walked out. Critical of the Saudi war in Yemen, Khashoggi was apparently tortured by a team of Saudis and murdered. Turkish authorities have since investigated and come to that very conclusion.

But Trump refuses to punish Saudi Arabia for this outrageous act of violence against journalists and the murder of a United States resident, all because he doesn’t want to hurt a massive arms deal, an excuse he repeated on “60 Minutes” on Sunday.

Basically, Trump is willing to overlook the murder of journalists and United States residents and human rights violations as long as the offending country is buying stuff from America or one of his companies.

In her Wall Street Journal column this week, Noonan took Trump to the woodshed for it:

“Mr. Trump told Lesley Stahl of ’60 Minutes’: ‘I don’t want to hurt jobs. I don’t want to lose an order like that,’” she wrote. “Later in the week he told reporters that Saudi Arabia is a ‘tremendous purchaser’ of U.S. military equipment, and this must be factored in. We used to be ashamed, or at least embarrassed, to be seen as arms merchant to the world. It didn’t quite sit with our vision of ourselves. And American presidents, as representatives of a nation with a certain moral stature, didn’t use to declare that our world stands are heavily influenced by arms contracts.”

Indeed, our reputation in the world used to be beyond reproach, but Trump has since cratered it by catering to dictators and ignoring human rights:

“In the end it’s about Mr. Trump, isn’t it?” she continued. “He is the living context and the constant question: For or against? He has had significant achievements—unemployment down, economy up, the courts, an imperfect tax bill that nonetheless got passed and was slightly better than what it replaced.”

Of course, that’s not true. Former President Obama and his economic policies are the reason why unemployment is low today. That’s an Obama achievement that has nothing to do with Trump. As for his tax law, that only benefited the wealthy and is draining the Treasury while sticking Americans with historic deficits and debt that threaten to bankrupt our nation.

As for the courts, stacking the judiciary with conservative zealots who will ignore the Constitution in order to rule on cases the way right-wingers want them to rule is nothing to brag about. It’s simply the beginning of the end of our democracy and constitutional law as we know it.

But Noonan is right when she calls Trump “crazy.”

“It’s no mystery,” she wrote. “He obscures his victories with his crazy. And so in the weeks before the election he rants around about ‘Horseface,’ and compares MBS to Justice Kavanaugh, the victim of unproved allegations. He continues to rag on Attorney General Jeff Sessions: ‘I could fire him whenever I want to fire him, but I haven’t said that I was going to.’

“It is political malpractice on an epic scale and cannot be helped because he lacks self-command and is vain,” she railed. “He thinks nobody communicates like him. Nobody does. He thinks nobody breaks through like him. Nobody does! He could have opted for a certain stature—the presidential stage, with its flags and salutes, almost leads you by the hand to stature. But he hasn’t.”

She then embarrassed herself in conclusion by accusing the “mainstream media” of hating Trump, even though reporting the facts and truth is not hate at all.

Overall, Noonan’s column is a biting criticism of Trump that signals that even conservatives are getting tired of his behavior. But she went out of her way to give Trump credit for the economy, credit that he doesn’t deserve, and attacked the media in a way that Trump will use to justify continued attacks on journalists and violence against them. The very thing that Noonan claimed to be angry with Trump about in the first place.