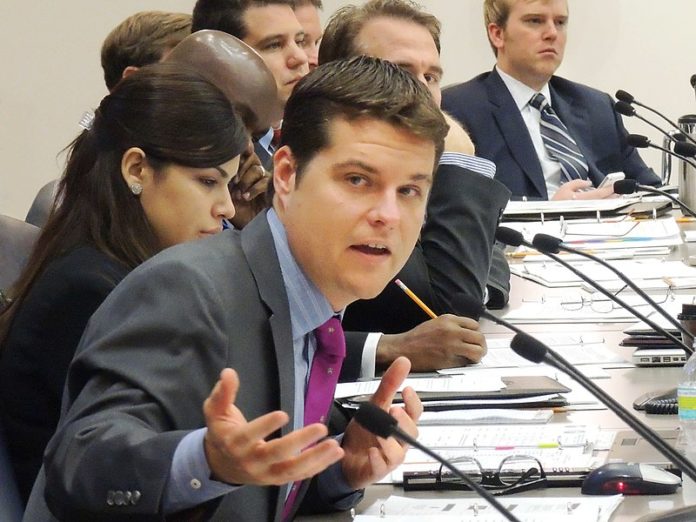 Cohen is due to testify in Congress on Wednesday and is expected to drop some bombshells that could severely damage Trump, not to mention the RNC, which Cohen served as deputy finance chair until June 2018 just months after his office and home were raided by the FBI.

Gaetz, who has done everything possible to protect Trump as a member of Congress and the House Judiciary Committee, which he happens to sit on, threatened Cohen in what appears to be an effort to intimidate him into not testifying.

Hey @MichaelCohen212 – Do your wife & father-in-law know about your girlfriends? Maybe tonight would be a good time for that chat. I wonder if she’ll remain faithful when you’re in prison. She’s about to learn a lot…

It’s quite an incendiary tweet, not to mention unethical and likely illegal.

And that’s why Pelosi warned him and all members that the Ethics Committee will look into such statements.

“I encourage all Members to be mindful that comments made on social media or in the press can adversely affect the ability of House Committees to obtain the truthful and complete information necessary to fulfill their duties,” she wrote. “As a result, such statements can be construed as not reflecting creditably on the House, and the Committee on Ethics should vigilantly monitor these types of statements, which may not be protected by the speech or debate clause.”

I encourage all Members to be mindful that comments made on social media or in the press can adversely affect the ability of House Committees to obtain the truthful and complete information necessary to fulfill their duties. https://t.co/NDnxkaiFCA pic.twitter.com/DIIgSHgeb5

This appears to be an attempt to intimidate a witness before he testifies before the House Oversight Committee tomorrow. https://t.co/bRk7Uckylt

.@mattgaetz is not “testing” Cohen’s memory. He is revealing embarrassing information about a witness on the eve of his testimony, and suggesting he could reveal more. That’s witness intimidation, not “testing.” https://t.co/l4rMR4vItw

Revealing embarrassing information and threatening to reveal more is not “testing” a witness. It is intimidating a witness. https://t.co/Pwxxdba9dE

In an organized crime family, the mobsters aren’t loyal to the capo out of love and affection, they do his bidding out of fear. What is Gaetz afraid of? – GOP lawmaker appears to threaten Cohen on eve of public hearing https://t.co/Ut6chB2qAU @MSNBC

“Each House may determine the Rules of its Proceedings, punish its Members for disorderly Behaviour, and, with the Concurrence of two thirds, expel a Member.”
—Article 1, section 5, clause 2

I’m curious @RepMattGaetz, does cyberbullying extend to threatening congressional witnesses on Twitter about dirt on their personal lives? ? https://t.co/cjmftyLNLp

Fully recognize politics is a bloodsport, & that the *shattering of norms* is our *new normal* now.

But for sitting member of Congress to tweet-taunt this at a GOVERNMENT WITNESS is appalling.

Cohen deserves no sympathy. But how does the congressman argue this isn’t a threat? https://t.co/VS8m2KIZTY

A tweet in which a sitting member of Congress tries his hand at witness intimidation: https://t.co/tSdtKvgDjb

Again, there really is no bottom. https://t.co/DbgRfEV1kJ

How does Congressman Gaetz, who is from Florida, know smack about Michael Cohen’s personal life? I wonder who he knows that he could have learned anything from? https://t.co/DbgRfEV1kJ

First, completely unacceptable & disgusting behavior from an elected official. Is it a crime? If someone sent this to a witness I was calling in a court proceeding I would sure try & charge him with attempted witness intimidation/obstruction. Enough with the scare tactics. https://t.co/XpFoaYIMJ2

.@mattgaetz is a disgusting excuse for a human being. He’s also engaged in criminal witness tampering in plain sight. No immunity is available. He deserves to be indicted, and of course needs to be kicked out of Congress.https://t.co/nTg9KzSwMW

Gaetz has clearly gone too far in his effort to protect Trump, and Cohen must have some truly explosive information and evidence to offer if Trump’s allies are this desperate to keep him from testifying.