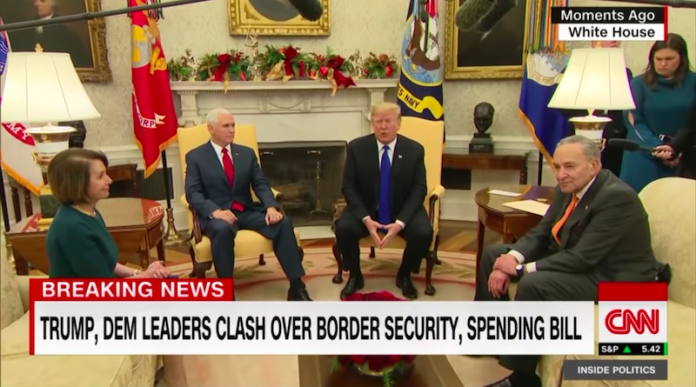 Senate Minority Leader Chuck Schumer (D-N.Y.) and presumed House Speaker Nancy Pelosi (D-Calif.) released a joint statement on New Year’s Eve Monday outlining their plan to end President Donald Trump government shutdown, a plan that will easily pass in the House and that Senate Republicans would be wise to support.

Trump has complete ownership of the government shutdown after taking all the blame during an Oval Office meeting last month. Thousands of federal workers have either been furloughed or continue to work without pay as the shutdown drags on into a second week.

But Trump has been desperately trying to shift blame to Democrats, who up until January 3rd have had no control in the House and will continue to be the minority party in the Senate. And he has repeatedly rejected any bill that does not include his border wall funding.

Heading into the New Year, the Democratic leaders released their planned legislation to end the shutdown in a joint statement.

“While President Trump drags the nation into Week 2 of the Trump Shutdown and sits in the White House & tweets, without offering any plan that can pass both chambers of Congress, Democrats are taking action to lead our country out of this mess,” they wrote. “This legislation reopens government services, ensures workers get the paychecks they’ve earned and restores certainty to the lives of the American people.”

The plan is identical to the bill the Senate unanimously passed prior to the shutdown, which House Republicans refused to pass because Trump told them he wouldn’t sign it.

But now that Democrats will have control of the House starting Thursday, that same bill will get passed.

“The President is using the government shutdown to try to force an expensive and ineffective wall upon the American people, but Democrats have offered two bills which separate the arguments over the wall from the government shutdown,” the statement continues. “The first bill would reopen all government agencies except for the Department of Homeland Security – not taking a position on the President’s wall. It would simply continue the funding levels and language that both parties have already supported. The second bill would extend the Department of Homeland Security’s funding through February 8th, which Republicans already supported in recent weeks.”

In short, Democrats are opening the door to debate and consideration of Trump’s wall funding, but refuse to let him hold the American people hostage by keeping crucial parts of the government closed.

Thus far, Senate Republicans have been largely spared blame for the shutdown while Trump is the one being blamed the most. In a recent poll, 47 percent of Americans blame Trump while only 7 percent blame congressional Republicans.

And that’s why Pelosi and Schumer are warning Senate Republicans to support the same bill they passed last month, or be seen as “complicit” with Trump’s government shutdown.

“If Leader McConnell and Senate Republicans refuse to support the first bill, then they are complicit with President Trump in continuing the Trump shutdown and in holding the health and safety of the American people and workers’ paychecks hostage over the wall.

It would be the height of irresponsibility and political cynicism for Senate Republicans to now reject the same legislation they have already supported.”

They concluded their statement by calling upon Trump to sign the bill into law.

“Once the Senate passes this legislation and puts us on a path to reopening government, the President must come to his senses and immediately sign it into law.”

Both Pelosi and Schumer posted the full statement on their Twitter accounts. But Trump did not respond until the next morning, and he once again whined about not getting wall funding.

The Democrats, much as I suspected, have allocated no money for a new Wall. So imaginative! The problem is, without a Wall there can be no real Border Security – and our Country must finally have a Strong and Secure Southern Border!

But the problem with Trump’s statement is that America’s border security gets weaker every day the government is shutdown because Border Patrol is part of the Department of Homeland Security, which is one of the government agencies affected. Border agents are currently working with no pay, and will likely be forced to seek employment elsewhere if they aren’t able to pay their bills because Trump refuses to sign the bills offered by Democrats.

Even Trump himself has admitted last month that border security is tight along the Mexican border.

In other words, a wall is not necessary. But our government is necessary, so Republicans must support the Democrats’ bill and Trump must sign it.