The United States Blues
Home Politics Congress Pelosi Asks Congressional Republicans: Did You Take An Oath To America Or... 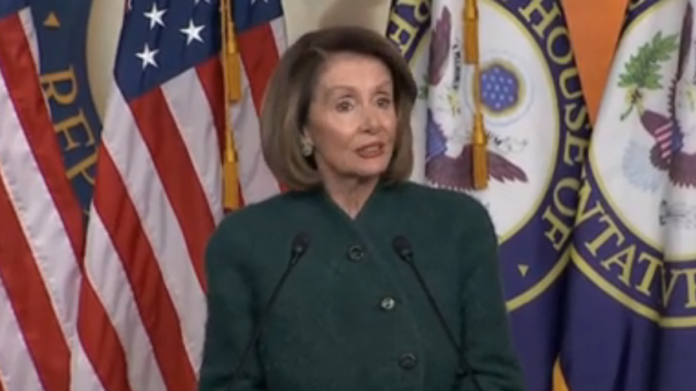 Speaker of the House Nancy Pelosi asked Thursday if Congressional Republicans were more loyal to the country or President Donald Trump.

During a press conference on Capitol Hill, Pelosi was asked about the White House meeting Wednesday at which the president reportedly stormed out of the room when he was told Democrats would not allocate any money for his wall on the Southern border. Pelosi noted:

“I think the meeting was a setup so he could walk out. I don’t even know if the president wants the wall.”

Pelosi also said she’s perplexed that Republicans in Congress refuse to fund the government and end the shutdown instigated by Trump’s demand for billions of dollars for his wall:

“Do you take an oath to the Constitution or an oath to Donald Trump?”

“Do you take an oath to the Constitution or an oath to Donald Trump?” Pelosi said after Senate GOP blocks House bills to reopen federal agencies

The Speaker doubled down on that sentiment via Twitter:

When Democrats took the majority, we promised to listen to good ideas, wherever & whomever they came from. That’s why we voted to pass the GOP language to re-open government that the Senate already passed. But they still they refuse to take “yes” for an answer. #EndTheShutdown

And Pelosi got plenty of support from others on social media who said Trump is to blame for being inflexible on the issues related to the shutdown and wall:

Its almost as if @realDonaldTrump waited until he no longer had a Republican House to get his unnecessary wall built so that he could in turn place all blame on the Democrats for not completing HIS campaign promises.

Please don’t give in to trump’s temper tantrums and demands.

Leader, the US does not negotiate with hostage takers. The bully in the WH is holding fed employees as hostages. Hold firm!

Trump WANTS the government shut down. It weakens the country, makes us less safe. That is his objective, as dictated by Putin.

The GOP is now the Party of Trump. That alone should terrify anyone who cares about this country and its future.