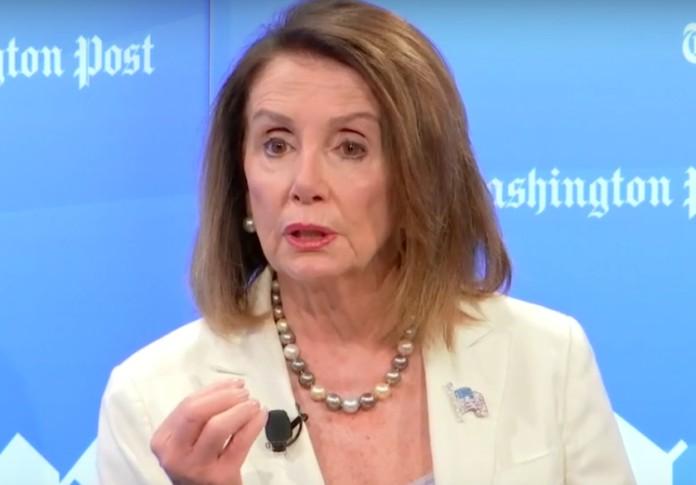 House Speaker Nancy Pelosi (D-Calif.) toyed with the idea of having Treasury Secretary Steve Mnuchin arrested and jailed for violating the law in an effort to shield President Donald Trump’s tax returns.

The law clearly states that the IRS “shall furnish” any American’s tax records on request by a chairman of a relevant House committee. Well, the House Ways and Means Committee certainly fits that bill, and that’s why Committee chairman Richard Neal (D-Mass.) issued a request for six years of Trump’s taxes and has set two deadlines, both of which Mnuchin did not meet.

Again, the law is clear on this matter, yet Mnuchin flagrantly violated it in order to protect Trump, which has already resulted in calls for his arrest.

On Wednesday, Pelosi sat for an interview with Robert Costa of The Washington Post and reiterated what the law says.

“As the law says, the administration ‘shall’ give. Shall. It doesn’t say ‘may,’ ‘should,’ ‘could,’ ‘under certain circumstances,’ it says ‘shall’ give those tax returns to the Ways and Means chairman,” she said.

“How far can you go on that front?” Costa asked. “Could you hold the Secretary of Treasury Steven Mnuchin in contempt? Some Democrats have even raised the prospect of arresting the Treasury Secretary if he does not comply with congressional demands.”

Pelosi did not commit to going that far, but did muse about it by reminding Mnuchin that Congress does have a place to put him.

“Well let me just say that we do have a little jail down in the basement of the Capitol,” Pelosi pointed out. “But if we were arresting all of the people in the administration, we would have an overcrowded jail situation, and I’m not for that.”

.@costareports: “Could you hold the Secretary of Treasury Steven Mnuchin in contempt? Some Democrats have even raised the prospect of arresting the Treasury Secretary if he does not comply…”

.@SpeakerPelosi: “We do have a little jail down in the basement of the Capitol.” pic.twitter.com/kqmw83fHWr

While Pelosi seemed to be just joking, it does appear that she’s making a threat under the guise of humor.

Mnuchin is breaking the law and Congress should not tolerate that at all. What Mnuchin is doing is different than refusing to comply with a congressional subpoena. He is willfully violating a law that has been in effect since the 1920s and there should be consequences. If Pelosi won’t defend the laws Congress makes, she’s only enabling Trump to break more laws, which means she has no business being Speaker.