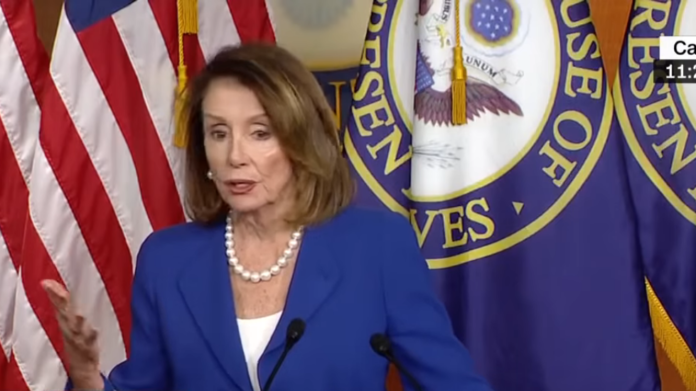 Speaker of the House Nancy Pelosi (D-CA) said Thursday she’s had more than enough of Attorney General William Barr’s foot dragging when it comes to the release of the full report from Special Counsel Robert Mueller on the 2016 election.

During a press conference, Pelosi said Barr’s four-page summary of the full Mueller report is completely inadequate and she demanded he release the full report immediately:

“I’ll say again: No thank you, Mr. Attorney General. We do not need your interpretation. Show us the report and we can draw our own conclusions. We don’t need you interpreting for us.”

Pelosi also noted that Barr’s insistence on giving the public a summary instead of the report was “condescending” and “arrogant.” She added that it “wasn’t the right thing to do.”

Later in the press conference, a reporter asked the Speaker if she accepted Barr’s assurances that Trump didn’t conspire with Russia to win the 2016 election. She replied:

That led to Pelosi criticizing the Department of Justice for having time to file court briefs in support of a lawsuit to overturn the Affordable Care Act (i.e. Obamacare), but not enough time to release the Mueller report by the end of the week:

“Not a good use of their time. We’ll see them in court.”

What makes absolutely no sense is why AG Barr doesn’t at least give the report to Congress so they can look at it and see what it contains. While he may need time to redact portions the public cannot see for privacy reasons, isn’t Congress entitled to see the everything since they allocated the money that paid for the investigation and writing of the report?

The longer Barr takes to give us the report, the more this entire thing stinks of a massive cover-up, an attempt to deny us the right to see the truth about this president and how he was elected. Perhaps AG Barr needs to be held in contempt of Congress.