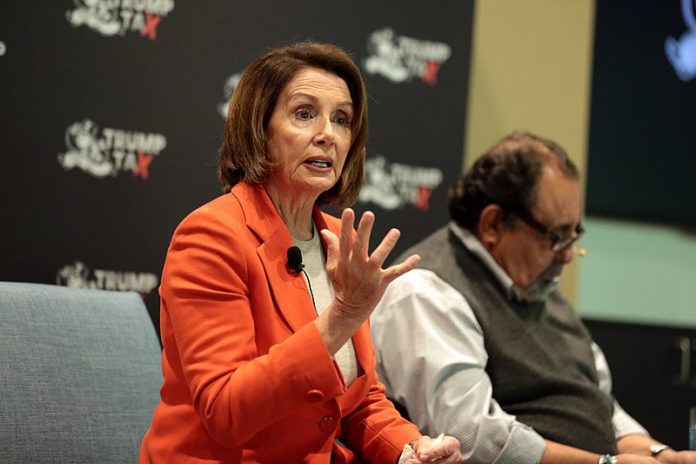 A spokesman for House Speaker Nancy Pelosi (D-Calif.) released a statement blasting President Donald Trump on Friday for putting the lives of the Democratic delegation in danger by leaking details of her trip to Afghanistan to visit the troops.

Congress has a constitutional duty to provide oversight, and part of that oversight means getting information about the situation on the ground in war zones, meeting with our allies and traveling abroad.

But just minutes before Pelosi and a Democratic delegation were scheduled to board a military plane to travel to the Middle East on government business, Trump sent Pelosi a letter postponing her trip in retaliation against her letter asking him to delay the State of the Union Address because of the government shutdown.

In doing so, Trump publicly disclosed the trip, which Politico reporter John Bresnahan pointed out had been a “closely guarded secret.”

Pelosi’s trip to Afghanistan had been a closely held secret due to security concerns, of course. Very few people knew she was heading there. @SteveScalise mentioned Pelosi was headed to Brussels in his presser this morning, which angered Dems.

It turns out the White House also leaked plans for Pelosi to fly commercial, which forced her to cancel the trip entirely because of the severe danger Trump has put her and the delegation in.

Drew Hammill, Pelosi’s spokesman, released a statement condemning Trump for endangering the lives of the delegation and for obstructing them from doing their constitutional duties.

“The United States Congress is a co-equal branch of government in our system of checks and balances,” the statement began. “The Congress has a constitutional responsibility to conduct oversight in the war zone where our men and women in uniform are risking their lives every day. After President Trump revoked the use of military aircraft to travel to Afghanistan, the delegation was prepared to fly commercially to proceed with this vital trip to meet with our commanders and troops on the front lines.”

“In the middle of the night, the State Department’s Diplomatic Security Service provided an updated threat assessment detailing that the President announcing this sensitive travel had significantly increased the danger to the delegation and to the troops, security, and other officials supporting the trip,” the statement continued. “This morning, we learned that the Administration had leaked the commercial travel plans as well.”

“In light of the grave threats caused by the President’s action, the delegation has decided to postpone the trip so as not to further endanger our troops and security personnel, or the other travelers on the flights,” the statement concluded. “Whether here or abroad, the Speaker always thanks our troops, diplomats and intelligence community for their heroism and service. The Speaker commends her colleagues on the delegation, who personally and officially have dedicated their lives to protect and defend the American people.”

Trump literally put the lives of Pelosi, the delegation and our troops at risk in order to retaliate against the House Speaker.

Indeed, it’s like Trump was hoping Pelosi would go and that her plane would be attacked.

Just imagine if Pelosi had leaked Trump’s flight to visit the troops in Iraq last month? Republicans would have lost their minds, yet they seem perfectly fine about Trump’s little tit-for-tat putting Pelosi’s life in danger.

Pelosi may have bruised Trump’s huge ego by asking him to postpone the State of the Union, but she did not in any way put his life in danger. But that’s exactly what he did and there should be consequences.