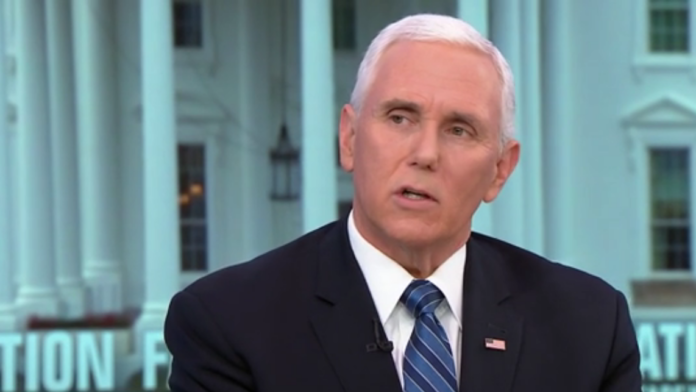 On the eve of the national holiday to honor civil rights leader Dr. Martin Luther King, Jr., Vice President Mike Pence did one of the most insensitive and objectionable things imaginable: He compared Donald Trump to Dr. King.

Appearing on “Face the Nation,” Pence began the interview by claiming that Congressional Democrats won’t agree to fund Trump’s wall even if the president reopens the government:

“So what the president has directed us to do is to reach out with rank-and-file Democrats in the House and in the Senate. What the president presented yesterday really is an effort to bring together ideas from both political parties. I think it is an act of statesmanship on the president’s part.”

Actually, what Trump presented was a ransom note in which he demanded billions for his wall (which Mexico was supposed to pay for) in exchange for limited protections for Dreamers. Those protections would vanish after three years.

“We’re absolutely determined to secure the border, to open the government.”

If that’s the case, then open the government and let the debate over the wall begin. As it is, nearly a million federal workers are facing the prospect of another payday passing without them receiving a dime of the wages they’re owed.

But what Pence said near the end of the interview may well be the most tone-deaf things ever uttered by an American political figure:

“One of my favorite quotes from Dr. King was, ‘Now is the time to make real the promises of Democracy. You think of how he changed America, he inspired us to change through the legislative process, to become a more perfect union. That’s exactly what President Trump is calling on the Congress to do, come to the table in a spirit of good faith.”

What?! Since when has Donald Trump ever tried to unite this country? He divides us every chance he gets and delights in turning us against one another for his own selfish political purposes.

Mike Pence needs to stop drinking the White House Kool-Aid before his face turns orange and he starts urging people to “believe” him.