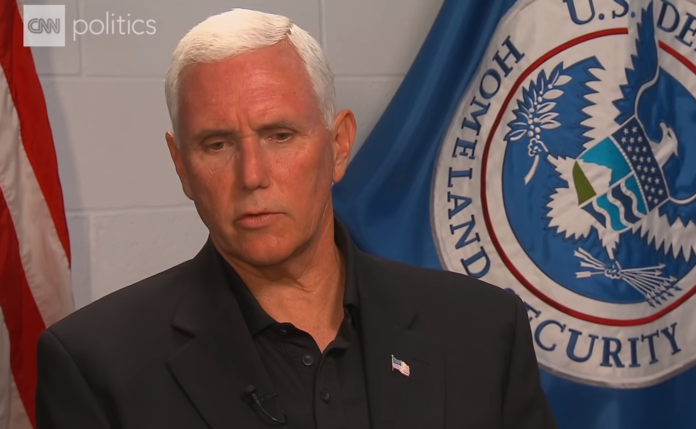 Vice President Mike Pence pitched a hissy fit on Twitter shortly after a CNN reporter showed him photos of the miserable conditions immigrants in federal detention centers are forced to live in, and his protestations suggest that the White House knows they’re losing the immigration battle as new reports reveal exactly how terribly those seeking asylum are being treated.

Hours after he toured facilities in Donna and McAllen, Texas, Pence sat down for an interview with Pamela Brown and immediately began spouting off administration talking points, telling her:

“This is tough stuff.

“I was not surprised by what I saw…I knew we’d see a system that was overwhelmed.”

“Look at it like this. When you look at that, what do you see?”

The VP tried to excuse the photo:

But Pence refused to respond, turning back to the two facilities he had just visited:

“It’s a facility you saw today represents the level and the standard of care that we are working to bring to all those caught up in this crisis. Remember, it was just a few short weeks ago that Congress finally acknowledged the crisis and gave us an additional $4.6 billion in humanitarian aid.”

Not long after the CNN interview, Pence was on Twitter, and he sounded incredibly irritated and defensive about what had transpired with Brown:

CNN is so dishonest. Today we took reporters to a detention facility on the border for families and children and all told us they were being treated well.

Rather than broadcast the full story, showing the compassionate care the American people are providing to vulnerable families, tonight CNN only played video of men in the temporary facility and didn’t play any footage of the family facility at all…

ignoring the excellent care being provided to families and children. Our great @CBP agents deserve better and the American people deserve the whole story from CNN! pic.twitter.com/hsKsU6umhW

Mike Pence loves to pretend that he’s a Christian. But a real follower of Jesus would be disgusted and offended by what’s taking place as it relates to immigrants seeking refuge in this country. Instead, he’s only too eager to repeat administration lies like some sort of holier-than-thou parrot.