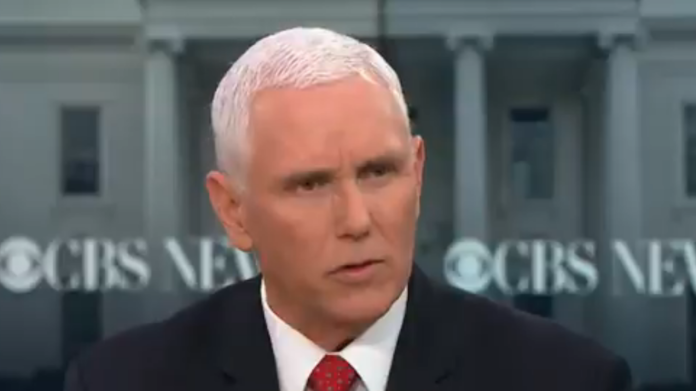 While Mike Pence holds the official title of vice president, it’s more accurate to call him President Donald Trump’s chief sycophant and lapdog, always willing to lick the shoes of his master.

Wednesday morning, Pence again proved his absolute fealty to Trump, appearing on “CBS This Morning” to discuss Tuesday evening’s State of the Union address, in which Trump suggested he may well shut the U.S. government down again next week if Congress refuses to pay the ransom of $5.7 billion the president is demanding for his border wall:

“I never think it’s a mistake to stand up for what you believe in, and I think what the American people admire most about this president is he says what he means and he means what he says in a very real sense.

“He said there’s a crisis at our southern border. He said he was determined to get the funding to build a wall and secure our border, and he was willing to take a stand to accomplish that.”

So does that mean that Trump will shutter the government yet again on February 15? With a pained expression on his face, Pence remarked:

“Well, I think our hope is that there’s not, but I can’t make that guarantee. The simple truth is that Congress needs to do their job. The president laid out last night a common-sense approach to deal with what is a very real crisis on our southern border.”

Common sense? When has Donald Trump ever possessed a smidgen of anything remotely resembling common sense?

Trump’s plan for a wall is a bust, and he knows it. The vast majority of Americans don’t want to spend billions on a wall, and it won’t make any impact on drug smuggling, human trafficking, or crime. It’s just a stupid campaign promise the president seems intent on inflicting on the country. But didn’t he also say Mexico would pay for the wall? So why is he now trying to extort the funds from taxpayers?

Pence, on the other hand, is a boot licking weasel intent on working his way into the Oval Office no matter what he has to say or do. In some ways, he’s more disgusting than his boss.

Do you think the shutdown was a mistake? – @JeffGlor

“I never think it’s a mistake… to stand up for what you believe in and I think what the American people admire most about this president is he says what he means and he means what he says in a very real sense.” –@VP Pence pic.twitter.com/x9MHuVQ9Hn