The United States Blues
Home National News Mike Pence Says Trump Bears No Responsibility At All For Actions Of... 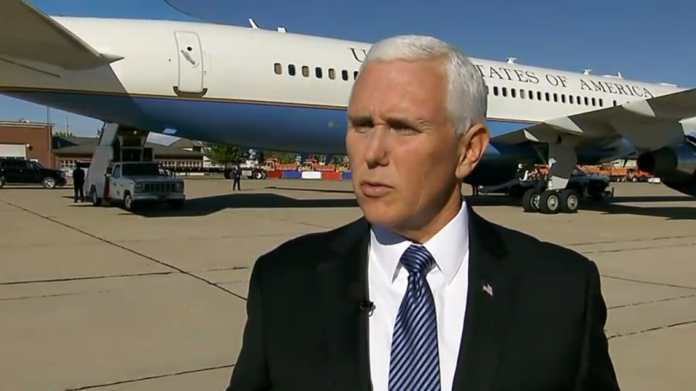 Despite that fact that accused MAGA bomber Cesar Sayoc was a devoted acolyte of President Donald Trump and covered his van with photos of the president, Vice President Mike Pence said Friday that Trump bears zero responsibility for possibly using language which may have incited Sayoc to mail over a dozen bombs to Democratic political figures and CNN.

Speaking to ABC News during a campaign swing in New Mexico, Pence was asked by reporter Tara Palmeri if the president had to accept “some responsibility for the bomb scare. Pence replied:

“And neither did Bernie Sanders bear any responsibility when the Illinois man opened fire at a Republican baseball practice.”

The vice president then added:

When Palmeri asked Pence about Trump’s remarks last week at a rally in Montana where the president praised a Republican member of Congress who physically assaulted a reporter, Pence tried to suggest that Trump had only been making a joke:

Pence then claimed that President Trump has nothing but noble motives no matter what he says or does:

While Mike Pence may claim to be a Christian, the very fact that he so ardently defends a man as immoral as Donald Trump suggests that his own soul is badly compromised. Pence, much like Trump, worships power. Nothing else matters.