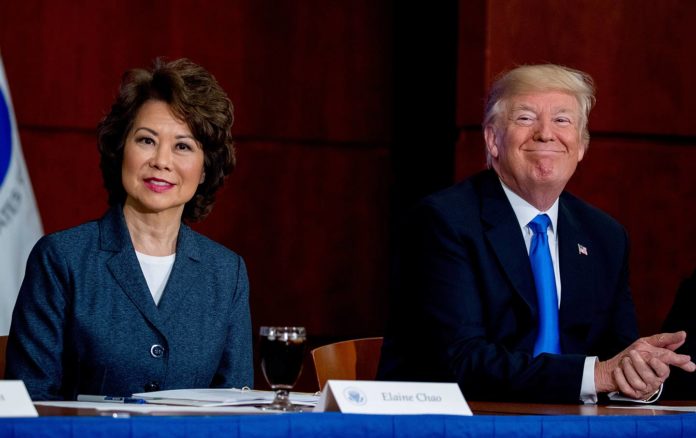 Just how desperately is the White House trying to spin the disgusting tweets President Donald Trump sent out Sunday telling four female members of Congress to “go back” to where they came from? So much so that they’re even saying the fact that Trump named Elaine Chao to be Secretary of Transportation is proof-positive that the president isn’t prejudiced.

Appearing on Fox News Monday morning, Marc Short, who serves as chief of staff for Vice President Mike Pence, remarked that he had recently attended a ceremony with Pence where immigrants were becoming naturalized citizens. He then added:

“And that day, he was joined by a Cabinet member in this administration who came to the United States as a child, unable to speak English, learned English, and eventually became a naturalized citizen. She is an Asian American, Elaine Chao, serving in the Cabinet of the Trump administration.”

If that wasn’t pathetic enough, Short then commented:

“So when people write the president has racist motives here, look at the reality of who is actually serving in Donald Trump’s Cabinet.”

Here’s Marc Short, Pence’s chief of staff, defending Trump’s racist tweets this morning by claiming that he can’t have had “racist motives” because Elaine Chao serves in his cabinet, and he’s making the point that Ilhan Omar never says positive things about the U.S.. pic.twitter.com/B7WkNxjQPG

Really?! That’s the excuse they’re going with? Sounds like the administration needs to get a clue.

This is just the latest lame attempt to put a positive spin on what Trump tweeted out. On Sunday, Matt Wolking, deputy communications director for the 2020 Trump campaign, insisted Trump wasn’t telling the women to go back to where they came from:

Anyone who says the president told members of Congress to go back to where they came from is lying.

He told them to “Then come back and show us how it is done.” pic.twitter.com/7pmb0DNz1c

Umm…the lying is clearly coming from the Trump defenders, and apparently Wolking thinks we won’t bother to read the entire tweet and only focus on the part he highlighted. But he’s wrong.

Of course, the president had to get into the act, too, as he always does. According to him, he’s the victim:

So sad to see the Democrats sticking up for people who speak so badly of our Country and who, in addition, hate Israel with a true and unbridled passion. Whenever confronted, they call their adversaries, including Nancy Pelosi, “RACIST.” Their disgusting language…..

….and the many terrible things they say about the United States must not be allowed to go unchallenged. If the Democrat Party wants to continue to condone such disgraceful behavior, then we look even more forward to seeing you at the ballot box in 2020!

Trump started all of this, and now he’s trying to find a way to blame others for his own racism. But the only person to blame for that can be found when he looks in the mirror. He’s the racist. He’s the deplorable. He’s the problem.