The United States Blues
Home National News Pete Buttigieg destroys hypocritical Mike Pence for being ‘the cheerleader of the... 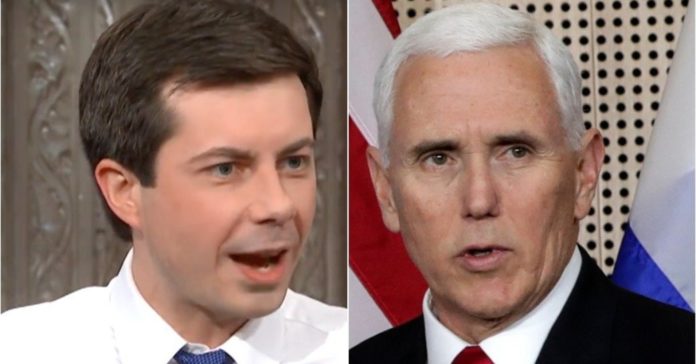 Asked about the fact that he represents a city, South Bend, in the same state that also produced Pence, Buttigieg remarked:

“Please don’t judge my state by our former governor. I think those views are so out of line with where anybody is. And look, I got to tell you, this was kind of a difficult journey for a lot of people.”

Buttigieg then went on to explain that many Americans have had to adjust to the changing moral landscape in the country:

“I mean, if you were conservative and from an older generation, and you were brought up by people you trusted to believe that it was morally wrong to be, for example, in a same-sex marriage, and then the pace of change has happened so quickly. I’ve benefited from the pace of that change. But I also understand how disorienting it must be for people to have gone through that.”

The South Bend mayor, who is openly gay, said he once thought that being gay meant he could never serve in office:

“Frankly, when I first got into politics, elected politics at the beginning of this decade in Indiana — In Mike Pence’s Indiana — I thought you could either be out or you could be in office, but you couldn’t be both.

“I came out in the middle of a re-election campaign because it was just that time in my life when I had to do that. Pence was governor. We weren’t sure what it would do to my political future in a socially conservative community. I wound up getting re-elected with 80 percent of the vote.”

Buttigieg also questioned the sincerity of Pence’s faith, wondering how anyone who claims to be moral can defend a man as immoral as Donald Trump:

“His interpretation of scripture is pretty different than mine to begin with. My understanding of scripture is that it’s about protecting the stranger and the prisoner and the poor person and that idea. That’s what I get in the gospel when I’m at church and his has a lot more to do with sexuality … and a certain view of rectitude.

“Is it that he stopped believing in Scripture when he started believing Donald Trump? I don’t know.”