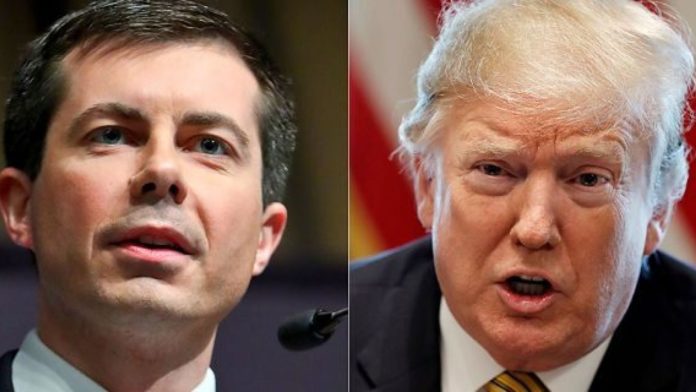 2020 Democratic presidential candidate Pete Buttigieg said this week that he’s stunned President Donald Trump’s ego is so fragile that the White House ordered the USS John McCain covered with a tarp and hidden during Trump’s recent trip to Japan.

Buttigieg, a veteran of the United States Navy, commented:

“It sends the message that once again our troops are going to be treated as props. We’re talking about an active duty United States military asset, a naval vessel, and the sailors who serve on it, and to hold it against them. For the White House to believe the president’s ego is so fragile that for his protection — for his emotional protection — they have to basically mask the fact that [USS McCain] is in service shows you just how far out of whack the priorities of this White House are.”

The South Bend, Indiana, mayor also noted that the president has proven yet again he cannot stand the fact McCain was a war hero while Trump got a medical deferment for “bone spurs” in his feet even though Trump later couldn’t recall in which foot the alleged injury took place:

“It’s also upsetting that troops were reportedly turned away if they served on board the McCain. It just puts a lie to the idea serve our troops, if support out troops comes with an asterisk that says you don’t support them if they are serving on a vessel that named after a war hero who service is as a reminder of your own embarrassing failure to rise to this country’s call for service.”

Though he initially denied the naval ship bearing the late Arizona senator’s name had been placed out of sight, Trump later admitted it had been, but again denied he had anything to do with such a plan, telling reporters on the South Lawn of the White House:

“Now, somebody did it because they thought I didn’t like him, OK? And, they were well-meaning. I didn’t know anything about it. I would never have done that.”

He would never have done that? Does anyone believe that load of bull? Trump was probably the one that called the Secretary of Defense and told him to make sure the ship wasn’t visible.

Donald Trump is a shallow, bitter, selfish little man who needs to be removed from office via impeachment or the ballot box.