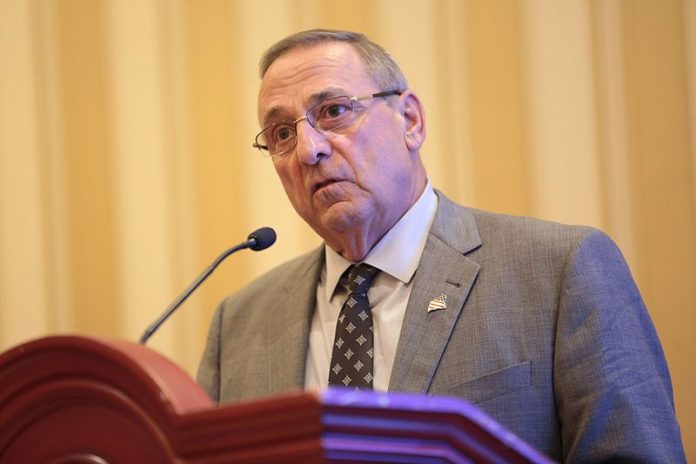 Republicans in Maine are so petty that Governor Paul LePage actually wrote the words “stolen election” on a certificate affirming the victory of Democrat Jared Golden.

Golden pulled off an upset of incumbent Bruce Poliquin in Maine’s 2nd congressional district this past November, the first time a challenger has unseated an incumbent in the district since 1916. The victory was just one of many that helped Democrats take back control of the House.

Poliquin challenged the election results in federal court by arguing that the state’s ranked choice voting system should be tossed and himself declared the winner. But the courts rejected his argument and he conceded the race.

Rather than sign off on the results like an adult, LePage sullied an official certification by accusing Golden of stealing the election from his Republican opponent.

As you can see below, LePage wrote the words “stolen election” in the margin beside his signature:

I’ve signed off on the CD2 election result as it’s no longer in federal court. Ranked Choice Voting didn’t result in a true majority as promised-simply a plurality measured differently. It didn’t keep big money out of politics & didn’t result in a more civil election #mepolitics pic.twitter.com/0fEhD1dvAb

The problem with LePage’s unbelievably petty claim is that Maine has TWICE approved their ranked choice voting system, which is actually easy to explain and should be implemented across the country.

The ranked choice system gives voters the ability to vote for their first choice and second choice of candidate in an election. Two independent candidates also ran in the race, and the system dictates that the second choice ballots of independent voters be counted and applied to the top candidates leading the race in the event of a run-off, which were Poliquin and Golden. Prior to counting these votes, Poliquin led Golden by only 2,000 votes. But because Golden was the overwhelming second choice among independent voters, he won the race by 3,000 once all the votes were tallied according to the law.

In short, Golden beat Poliquin fair and square according to the voting system Maine voters approved, something he reminded LePage of in his response on Twitter:

Not only are the Governor’s comments wrong, this is yet another attempt by the Maine GOP to undermine the will of Mainers, who twice voted to approve RCV. Maine people are tired of this kind of poor leadership — which is why they voted for sweeping change in November. #mepolitics https://t.co/aMDBj1Onnc

Other Twitter users also slammed LePage for being childish.

“Stolen Election” because a Democrat won using the electoral system set up by state law and approved by voters.

Hey @golden4congress, congrats on the amazing wall decor for your new office in Washington! This is bound to generate some hilarious conversations. Priceless immaturity immortalized forever.

because writing “stolen election” on the certificate is the height of civility, right?

The GOP really is the party of snowflakes isn’t it?

You really wrote “stolen election?” It’s odd how so many of you right-wing nutcases are so childish. What happened to dignity and personal honor?

Seriously, Paul LePage should be ashamed of himself and Mainers are fortunate they won’t have to deal with him again since he will no longer be in office as of January 2, 2019.