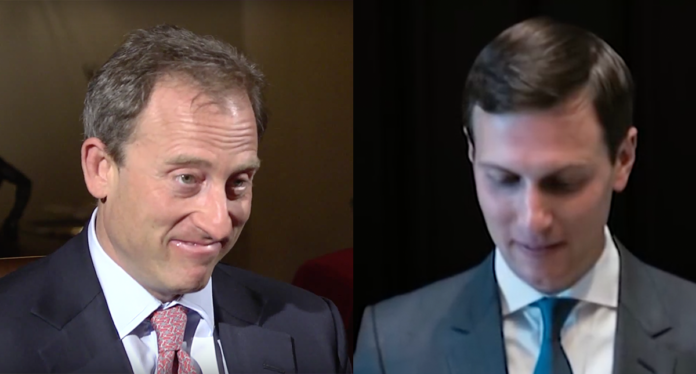 Billionaire financier Josh Harris, who owns several sports teams and is senior managing director of a private equity giant called Apollo Global Management, is caught up in the latest Jared Kushner scandals. At issue: Apollo made a whopping $184 million loan to fund a Kushner-owned Chicago skyscraper after taking multiple personal meetings with Kushner at the White House to discuss government infrastructure policy. A position in the administration was also reportedly floated for Harris, presumably as part of a deal. While the job hasn’t materialized, the loan came through months after the meeting with Kushner, raising serious ethical concerns.

The loan of 184 million dollars, made November 1st, 2017, was reported to refinance a mortgage on a Chicago skyscraper.

Forbes lists Apollo Global Management as a $242 billion (assets) firm. The firm made an unusually high loan to Kushner, triple of what their typical loan would be. The loan was one of the largest that Kushner Companies received last year, although another even higher $325 million loan came from Citigroup after Michael Corbat, the CEO, met with Kushner in the spring.

The New York Times broke the story last evening, noting it was “2 meetings with Jared Kushner, and $509 million in loans” as a result.

Times journalist, Jesse Drucker literally ran to join Rachel Maddow on MSNBC after the story broke late Wednesday. He explained that since there aren’t public records of the meeting, we are left having “to take their word for it” that Kushner didn’t discuss his personal business deals with the executives at the White House meetings. However, just knowing that a job offer was floated, as well as the conflicts of interest apparent in discussing infrastructure plans as a potential lender for Kushner remain disturbing.

If there's a specific News Gods sacrifice you're supposed to make to ask them to please spread the news out a little bit over time, I would like to know what that is.https://t.co/q4ENuCdYmR

“We have no indication that they discussed the loans. I think the issue ethics experts would raise is you have a potential issue even if he doesn’t raise the loan, right? I mean Jared Kushner is one of the most powerful people in the world right now. We know that he discussed a job, a White House job with Joshua Harris and that on its own raises concerns about the subsequent financial transactions with Kushner Companies and Apollo,” said Drucker.

Drucker went on to explain that Apollo had a vested interest in both the infrastructure plan as well as Trump’s tax plan. Interestingly, although Trump claimed he would make private equity managers pay a higher tax rate during the campaign, “that disappeared.” How convenient?

“Apollo was seeking something from the Trump administration implicitly, and as they are providing input into what the infrastructure plan should be,” said Drucker.

Rachel Maddow noted that Kushner hasn’t divested from the company that owns the Chicago skyscraper.

“According to the Times tonight, Kushner still owns the part of Kushner Companies that received the Appollo loan for the Chicago skyscraper, and Kushner also still holds a stake in the entity that owns the Brooklyn buildings, which got that loan from CitiGroup,” said Maddow.

“Again, hundreds of millions of dollars being shoved at him and his personal business interests, while taking meetings with executives from those lenders in the White House, in his capacity as a White House official,” she continued.

Walter Shaub, the former director of the federal Office of Government Ethics, commented on his own problems with the Kushner report.

Rules or no rules, let's pull back to the 1,000-foot level and ask ourselves: Does it seem like a job as Assistant to the President should be for sitting in the White House across a table from bankers that your cash-strapped family is desperately plying for a $184 million loan? https://t.co/mQB5qfTebk

The private equity groups and Kushner Companies deny that the White House meetings had any impact on the loans that transpired for Kushner. Apollo’s spokesman said that Harris had no involvement in the company’s decision to loan the money to Kushner.

See more from Rachel Maddow and Anderson Cooper below: