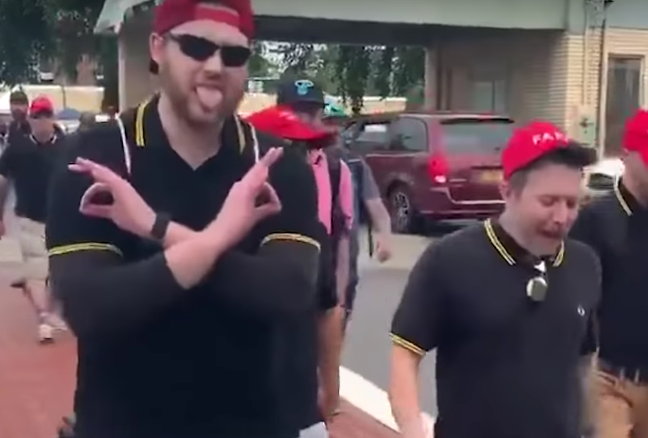 With domestic terrorism by white nationalist groups on the rise in the United States, members of a group known as the Proud Boys demonstrated the threat they pose to society last week by going to the home of one of their biggest critics to intimidate her.

Independent Philadelphia researcher Gwen Snyder has spent a considerable amount of time digging up information on the Proud Boys, their membership and activities, often going on to publicly post the information she finds to inform her community and the nation about this dangerous group of men who often commit violence against those who disagree with their views.

Senator Ted Cruz (R-Texas) has even introduced legislation to designate those who oppose the Proud Boys as domestic terrorists when it should be the other way around.

Snyder posted about Cruz’s association with the group, which supports President Donald Trump, and then told the horrifying story of being visited by Proud Boys members at her home in the dead of night. Luckily, she was not at home or it’s possible they would have done more than just harass her neighbors and put stickers on her door.

And she caught the whole thing on tape, which she has shared with police.

PBs came to my home in the middle of the night to terroristically threaten me for my research of the far right.

Now, I have video. pic.twitter.com/yzvLB1tBH5

I research and publish information about racist hate groups like the Proud Boys, with a focus on violent activity in my city, Philadelphia.

On June 29th, at 11:20 pm, my downstairs neighbor texted me while I was out of town to warn me that a group of men had been looking for me. pic.twitter.com/jq2D6llVFG

I didn’t notice the text until the following evening, and followed up with him to ask what had happened.

As it turned out, my visitors had been Proud Boys.

And they meant business. pic.twitter.com/foAYnZdJv6

My partner went down to get details. The neighbor said that a group had approached, and two Proud Boys had identified themselves, tried to find out if he knew me, and told him to relay the following message to me:

Then, they slapped a sticker on our front door, a sticker he’d removed and saved.

We later discovered (via Twitter) that the morning after the visit, a different neighbor had found more stickers placed at the intersection where our apartment building is located. pic.twitter.com/nlIKc02hln

Who knows what these men would have done if Snyder had been home. Members of the group are becoming emboldened by Trump and other Republicans who incite violence against their opponents and critics. Some are even facing charges in New York and Portland for violently attacking protesters.

Here’s a video of the Proud Boys being stopped from attacking protesters by a line of police in Orlando via YouTube.

“It’s really disconcerting, both personally in terms of my own safety, and also just terrifying to think that’s where we’re at as a country,” Snyder told The Daily Beast. “In the past, they’ve been really more optics-oriented. This is a real turn for them, going to the homes of people, women, and people with children and terrorizing them in the middle of the night.”

It’s time for police and the FBI to start paying a visit to the homes of these so-called “men” to make them understand that this kind of tactic is unacceptable.