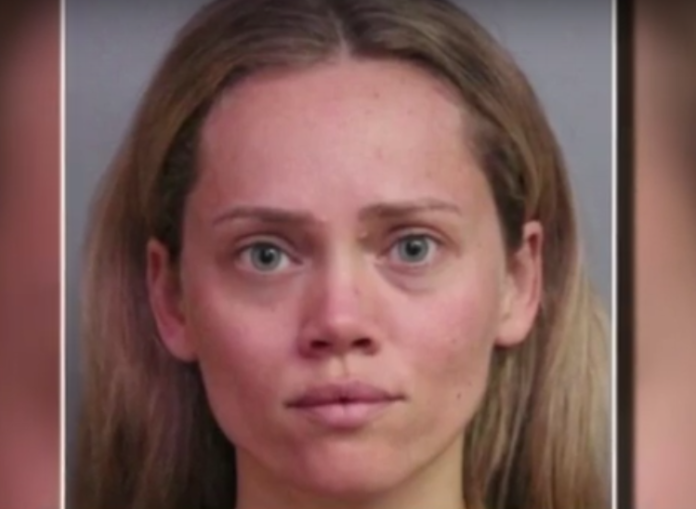 Men who commit domestic violence should not have access to firearms, yet when a Florida woman named Courtney Irby turned in her husband’s weapons to the police to prevent him from killing her with them, they arrested her even though his record makes him a clear threat to her life.

Courtney is already a victim of domestic violence. Her estranged husband Joseph Irby literally tried to run her down with his vehicle outside of court after a divorce hearing, resulting in his arrest.

He yelled at her. He threatened her. And the police should have confiscated his guns. But they didn’t.

Rather than wait for Joseph to murder her with one of his guns, she gathered them and took them to the police department to turn them in.

But instead of protecting her, the Lakeland Police Department arrested her and charged her with grand theft firearm and armed burglary.

Irby entered her estranged husband’s apartment and conducted a search for the weapons. She did this to save her own life and the lives of her children, which she knew she had to do while he was behind bars.

“Well, he was arrested yesterday for trying to run me over with his car and he is now in jail,” Irby told officers. “So I went to his apartment, since he is in jail, and I searched his apartment for the guns I knew he had and I took them.”

“So, you are telling me you committed an armed burglary?” the officer asked.

“Yes, I am, but he wasn’t going to turn them in so I am doing it,” Courtney responded.

Police should be applauding her for taking action. After all, she only turned in her abuser’s firearms. It’s not like she tried to kill him with one of them. Not that she could anyway because ‘Stand Your Ground’ laws apparently don’t apply to women in the state.

“The case of Courtney Taylor Irby demonstrates once more the dangerous linkage between intimate partner violence and access to firearms,” she said. “Court records show that Irby applied for a temporary injunction against her husband and the two were in the process of a divorce. She was actively protecting herself and her family from an estranged husband who had not turned over his firearms to law enforcement, and was arrested for it. We should be outraged by her arrest, and Irby should not be prosecuted by the local State Attorney’s office.”

On top of that, the father of a Parkland school shooting victim also spoke out in Courtney’s defense.

Bail Granted for Woman Arrested After Handing Over Guns. This is not enough. Charges should be dropped and @LakelandPD should be providing protection from this domestic abuser.https://t.co/LRlqxRoizU

.
Perhaps the most galling aspect of this situation is that Courtney remained in jail for FIVE days while the man who tried to kill her only stayed in jail for one day. Let that sink in.

Clearly, the police are not interested in doing their jobs. They’d rather protect a gun-owning domestic abuser than the woman who smartly turned over the firearms to police to prevent them from being used to kill her or her children. Law enforcement owes this woman an apology, and they owe her abuser more jail time and the revocation of his guns. That’s the only way to make this right.