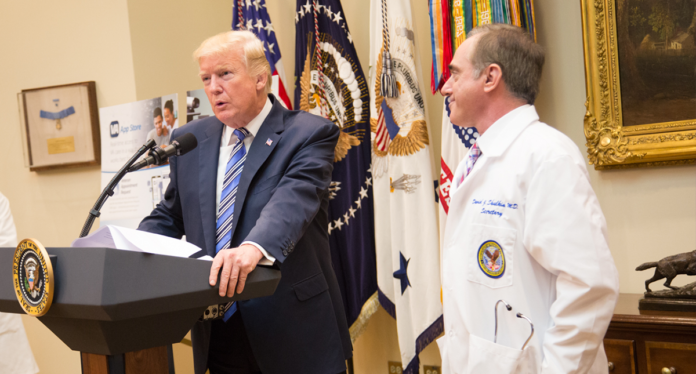 The President, known for his “You’re fired!” sound bite on The Apprentice, made it much easier for the Department of Veterans Affairs(VA) to say those words to federal employees. The VA was recently rocked by evidence of misappropriation of funds related to travel expenses. The change in policy was initially intended to help purge the VA of corruption from the top. Instead, it has become a convenient method to fire whistleblowers and lower-level junior staffers for trivial reasons instead, according to investigations by ProPublica.

Meanwhile, the corrupt VA chief David Shulkin remains right where he is. Shulkin has been called one of the “most corrupt Trump cabinet members” and has reportedly started an “all-out cold war” with senior staffers. The latest scandal is an accusation by the Inspector General that he misused taxpayer funds for a trip to Europe with his wife for what should have been official government work.

The department has been fraught with corruption for years. In June, Trump signed a bipartisan bill making it easier to fire VA employees.  He reasoned:

“VA accountability is essential to making sure that our veterans are treated with the respect they have so richly earned through their blood, sweat and tears,” Trump said that day. “Those entrusted with the sacred duty of serving our veterans will be held accountable for the care they provide.”

The newly appointed VA chief, David Shulkin, who is the only Obama appointee nominated by Trump, and who was unanimously confirmed by the Senate, said:

“I do not see this as a tool that’s going to lead to mass firings.”

However, it did lead to mass firings. According to the report co-published by Politico and ProPublica, firings skyrocketed to 60 percent higher during the second half of 2017, and 1,704 employees were fired out of a total of 370,000. Instead of targeting top officials, the “rank and file” have been the overwhelming focus. While only four senior leaders lost their jobs, most were low-level staffers like housekeepers, food service workers, and nursing assistants.

While some were fired for office policy offenses like arriving late for work, others claim that they were let go for whistleblowing on those higher up the ranks, which is precisely what the Trump bill was supposed to prevent.

“The VA feels they can do whatever they want with people with impunity,” said Eric Pines, an employment lawyer who represents multiple fired VA workers. “It’s a day-and-night feel since the Trump administration came into office.”

These mass firings create a vicious cycle: The more people who are fired, the more ineffective the agency seems, making the agency look like it needs even more of a clean sweep.

“If reducing the workforce makes the VA less effective, it will only reinforce the argument that the agency is broken and needs to be cleaned out.”

The situation is so dire that one of Shulkin’s senior aides has resorted to lobbying Republican staffers in Congress to demand Shulkin and his deputy secretary’s resignation. Shulkin, however, understood the policy change from the White House the “green light” he needed to “crack down on subversion.” The resulting upheaval, dysfunction, and hostility have led to Shulkin placing an armed guard outside his office.

Shulkin disputed the findings of the IG’s office, saying the report “selectively omitted countervailing evidence and didn’t give him enough time to respond to the allegations.” Somehow he’s been able to keep his job, with support from the White House.

But isn’t Trump the guy who pledged to prevent this kind of thing from happening in the first place?

“Why is no one putting together how ironic this is that he can dispute this report and still have his job?” said Ibidun Roberts, an attorney with the American Federation of Government Employees (AFGE)

“Our employees are fired for much less,” she said.

A new report from the Inspector General is about the be released, and reports suggest Shulkin is acting “erratically,” and is “extremely paranoid.”

VA secretary David Shulkin is said to be acting erratically amid reports of a new internal investigation — https://t.co/z7PAAQEPep via @businessinsider

The push to clear out corrupt officials in the VA gained traction much earlier in 2014 after news broke about the VA hospital in Phoenix, where officials had altered records to conceal long wait times.

A year before, Concerned Veterans for America (CVA), a Koch brother’s backed organization, was founded, and the group seized on the Phoenix scandal to lobby Congress to pass laws removing protections for VA officials. Even then, it was meant to target senior career employee, like the director of the Phoenix facility.

Today, it appears the push to fire government employees has headed down the wrong path. When it should be about removing corrupt top officials, it has only helped get rid of those who would point out the corruption. One might see why Trump would favor that approach, after all.