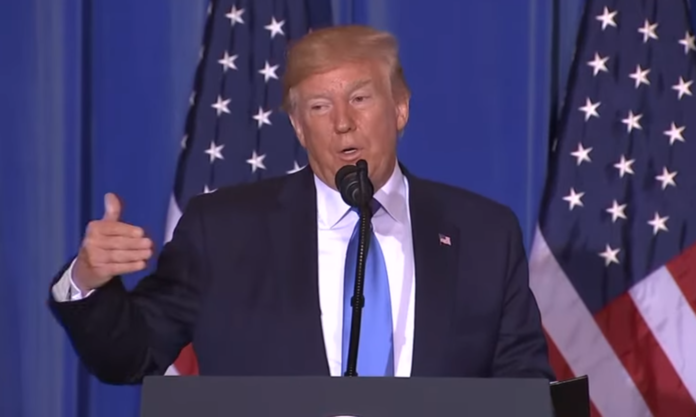 President Donald Trump and the Republican Party had better prepare themselves for a devastating defeat in 2020, because a longtime polling expert just predicted that Democrats are going to wipe them out in a landslide.

Trump continues to insist that he and the GOP are headed for a major victory next year when the presidential election rolls around in November. Not only is the White House up for grabs, so is the Senate. Democrats already appear strong enough to hold onto to the House, which they took back in 2018 in a blue wave that hit Republicans hard in state after state.

Now the polls are showing that another blue wave is on the way, and it could even dwarf the one in 2018.

Multiple polls show that Trump is underwater in the swing states he won in 2016, including the Rust Belt states that he made many promises to, but has since broken because of his trade war with China.

In fact, Trump’s numbers are so bad that even his internal campaign polls show him getting beat.

But again, this election isn’t just about the presidency, it’s about the Senate as well, and Trump is dragging Senate Republicans down with him.

All the signs appear to point toward a disaster for Republicans on Election Night, and that’s exactly what polling expert Stanley Greenberg is predicting.

During an appearance on CNN Monday, Greenberg pointed out that the GOP move to the extreme right has left a bad taste in voter’s mouths.

“I think what happened going into 2016 is Donald Trump took over the Tea Party base of the party, allied it with evangelicals and took the party to a very extreme end,” he said. “I believe Donald Trump’s election will speed the defeat of the Republican Party because of its dominance by the Tea Party and evangelicals, which won’t consider compromise, which won’t consider a multicultural America in a part of our future. And I also thought it would speed up the resistance and also people’s consciousness of what they believe and their values, and all of that has happened.”

Indeed, even Texas is starting to turn on Trump, so several red states could turn blue in 2020, setting the stage for a Reagan-esque electoral victory for the Democrats.

Specifically, Greenberg says he believes Democrats will destroy him 385-153, a landslide win and a clear mandate.

“Every trend is moving away from the Republicans,” Greenberg concluded. “More and more territory will be in play.”

Americans should keep in mind that for this nightmare-ending scenario to occur, it will require them to vote on Election Day. Republicans, meanwhile, should be freaking out enough to abandon Trump right now as their 2020 nominee. But they won’t, because Trump owns every single one of them.