The United States Blues
Home News Pompeo escalates hostilities toward Iran by accusing them of committing an ‘act... 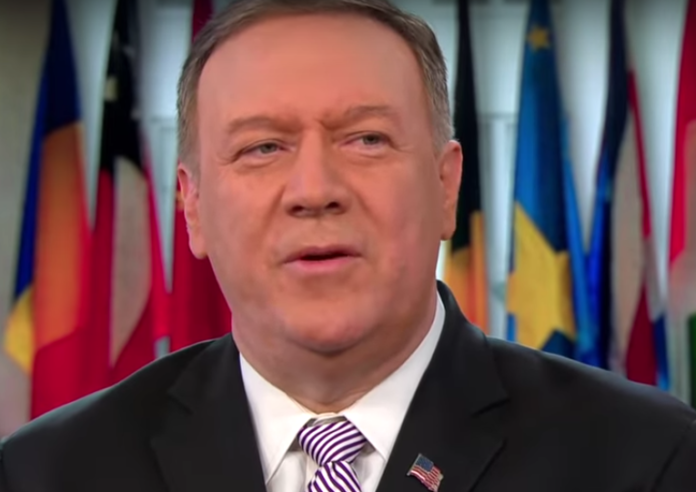 Secretary of State Mike Pompeo is hellbent on marching the United States into another war in the Middle East, appearing on “Face The Nation” on Sunday to accuse Iran of committing an “act of war” and threatening a military strike against them all while claiming to seek a diplomatic resolution.

An oil field in Saudi Arabia recently suffered a drone attack, responsibility of which has been accepted by the Houthis, an Iranian-backed group that is at war with the Saudis. However, Iran has forcefully denied direct involvement in the attack and thus far, the Saudis nor our own government has provided evidence that the Iranians are directly behind it.

But that isn’t stopping Pompeo from fanning the flames of war on Sunday during an interview with Margaret Brennan.

“It was a sophisticated attack,” Pompeo said. “These weapons systems had ranges that could not have come from the Houthis. It is crazy for anyone to assert that they did. I mean it is literally nuts on its face to make an assertion that this was an attack by the Houthis. This was Iran true and true, and the United States will respond in a way that reflects that act of war by this Iranian Revolutionary regime.”

Brennan pointed out that President Donald Trump, nor the Saudis, have directly blamed Iran for the attack like Pompeo has been doing, and further noted that Iranian Foreign Minister Mohammad Javad Zarif continues to deny the accusations.

“There’s already ample evidence that demonstrates that he’s lied,” Pompeo claimed. “You saw the Saudis showing these were Iranian systems built– built and manufactured inside of Iran. I don’t know why anybody listens to the Iranian foreign minister. He has nothing to do with Iranian foreign policy, and he’s lied for decades and then he resigned. It– it’s just– it’s not even worth– it’s not even worth responding to him. It’s– it’s been– it’s beneath the dignity of anyone in the world to listen to someone who repeatedly makes the claim that the Houthis launched this attack.”

The fact is that the Houthis have accepted responsibility for the attack, and there are a lot of ways for groups to get their hands on weapons. After all, the United States sells these kinds of weapons around the world. It wouldn’t take much for them to fall into the wrong hands.

Pompeo, of course, did not offer the evidence he supposedly is talking about, and referred to our own intelligence agencies, they very agencies that Trump has been attacking since taking office and the very agencies that were used to justify attacking Iraq in 2003 by another Republican administration that thirsted for war.

Trump’s top stooge then claimed the administration is seeking diplomacy.

Of course, it’s hard to actually believe Trump is seeking diplomacy the way Pompeo is talking and after the way the State Department has been gutted since he took office. Also, Trump is the one who created all this tension in the first place by withdrawing from the Iran nuclear deal.

Furthermore, if Trump and Pompeo were serious about diplomacy there would not be American troops and equipment en route to Saudi Arabia right now. Saudi Arabia has been a traditional American base for starting wars in the Middle East for decades, and it’s clear that Trump is willing to attack Iran if it means Saudi Arabia will fill his pockets.

At this point, Trump and Pompeo are the ones who can’t be trusted. Both are bigger liars than Zarif could ever hope to be and both have thirsted for war in Iran for years. We have been at war for too long and our troops have bled enough over the last two decades while our Treasury is already drained. A new war, especially in Iran, would spill even more blood and waste more money, and we can’t afford to lose either.

If the Saudis want a war with Iran, they should be the ones to fight it.