The United States Blues
Home News Pompeo smirks after being informed that Kim Jong Un may have had... 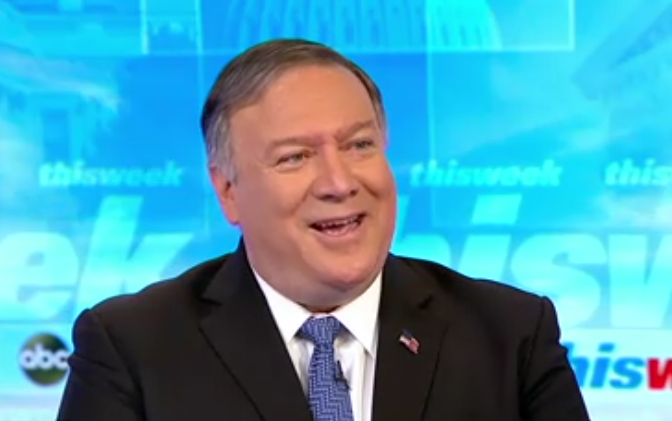 Secretary of State Mike Pompeo appeared to find a report that North Korean dictator Kim Jong Un had his top negotiators executed after his Hanoi summit with President Donald Trump amusing after being informed about it by ABC host Jonathan Karl on Sunday.

The Hanoi summit in Vietnam earlier this year was a complete disaster for Trump and the White House as North Korea rejected denuclearization and ended the negotiations early. The White House even had to cancel a signing ceremony planned for after the summit.

Kim Jong Un expects Trump to lift economic sanctions against his country before he will even consider surrendering his nuclear arsenal.

Trump has since dangled lifting those sanctions, but North Korea refuses to budge, clearly hoping they can dupe Trump into giving them what they want most while not denuclearizing at all.

On Sunday, however, Karl noted that future negotiations could end up being more complicated because Kim Jong Un has reportedly murdered his own negotiators, meaning new ones would have to be brought up to speed and may take a harder line in order to make their “Dear Leader” happy.

“There were reports out of the region that after the Hanoi summit that several of the people that you were negotiating with that were part of that negotiating team in Hanoi were executed,” Karl said. “Do we believe those reports are accurate?”

“I don’t have anything to add to that for you this morning,” Pompeo replied.

“But there seems to have been some kind of a shakeup of his team over there,” Karl pressed.

Rather than express horror, Pompeo actually seemed amused by the reported executions and smirked while arguing that Trump gets to pick his negotiators so Kim gets to pick his, even if it is through brutal executions.

“It does appear that the next time we have serious conversations that my counterpart will be someone else but we don’t know that for sure,” he said. “Just as President Trump gets to decide who his negotiators will be, Chairman Kim will get to make his own decisions about who he has to have these conversations.”

“I don’t have anything to add to that,” Secretary of State Mike Pompeo tells @jonkarl when asked if the U.S. can verify reports that some of the people who were part of the North Korean negotiating team in Hanoi were executed https://t.co/P6iz1j1VA4 pic.twitter.com/olNG5HZmpq