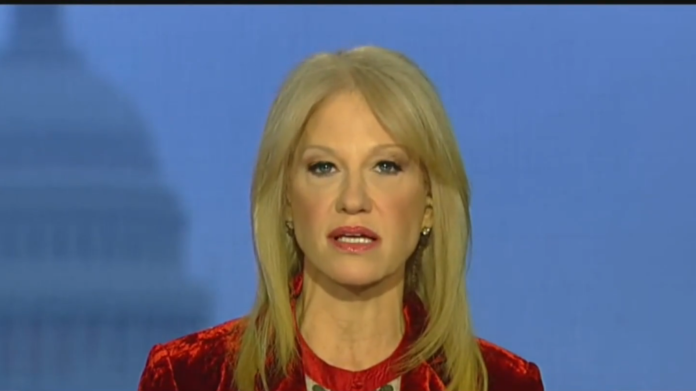 White House counselor Kellyanne Conway made an appearance on “Fox & Friends” Monday morning, and judging by her comments about the Democratic candidates who have announced they’ll be seeking the 2020 nomination to run against President Donald Trump, it sounds like she’s been taking lessons in political hackery from her boss.

Conway was asked about Trump’s planned rally in El Paso this evening and the fact that Beto O’Rourke — who was narrowly defeated by Senator Ted Cruz (R-TX) — will be holding a counter-rally the same time as the president’s. To that, Conway replied:

“That guy … apparently wants to reward his loss of a Senate seat, his loss to Ted Cruz in Texas, with running for president. Let’s just bring that to the whole country now, being a loser.”

While she was at it, Conway also went full hypocrite, saying O’Rourke was only having a rally in El Paso to get “a lot of free airtime for the would-be 2020 race, and people should see that for what it is.”

Conway neglected to mention that in 2016, Trump received over $2 billion in free media which helped propel him to victory.

But Conway didn’t stop there, saying the entire 2020 Democratic field was less than impressive:

What about Senator Kirsten Gillibrand (D-NY), who announced her candidacy recently? Conway remarked:

“Kirsten Gillibrand, this weekend in her 50s, apparently it was the first time she had ever eaten fried chicken, and she waited for the cameras to roll.”

And Conway did everything but call Senator Elizabeth Warren (D-MA) “Pocahontas” the way her boss does:

“Elizabeth Warren spent decades, folks, decades appropriating somebody else’s heritage and ethnicity, and she’s been lying about it.”

Note to Conway and the White House: Attacking your opponent for “lying” is probably not a winning strategy when your candidate has lied nearly over 8,000 times in 2 years.

Clearly, the Trump White House is indeed worried about president’s prospects in 2020, provided he even lasts that long. As Senator Warren pointed out over the weekend: