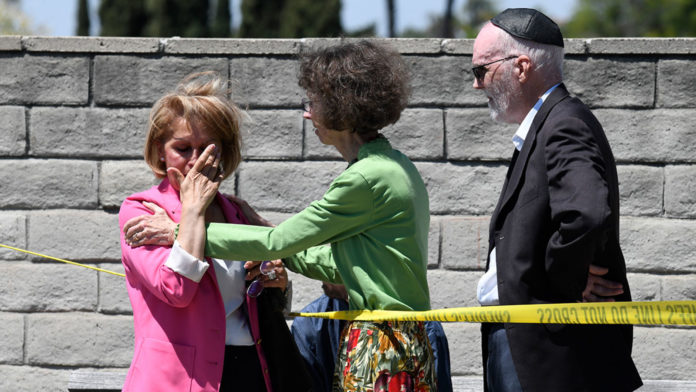 The 19-year-old man who allegedly opened fire with an assault rifle inside a synagogue in Poway, California, leaving one dead and three injured, said in an online screed that he believed Jews were trying to destroy the white race, according to The Daily Beast:

“The manifesto was first shared on the toxic trolling board 8chan minutes before the suspect opened fire. It contains apparent misinformation and is clearly meant to be found and disseminated. (It uses the same question-and-answer format of the manifesto of the terrorist who attacked two mosques in Christchurch, New Zealand.)

“The writer identifies himself as a Christian of European descent. While he eschews political labels, the writer repeats a far-right accusation that Jews seek to destroy the white race through immigration of non-whites. It is the same purported motive given by the man who allegedly killed 11 Jews at a Pittsburgh synagogue last October.”

The suspect, John Earnest of San Diego, was taken into custody shortly after fleeing from the scene of the crime.

Earnest is accused of entering the Chabad of Poway synagogue Saturday morning and opening fire on the gathered congregation with an AR-15 semiautomatic assault rifle.

Saturday was the last day of Passover, one of the holiest of all Jewish holidays when Jews celebrate their deliverance from slavery in Egypt.

A local college confirmed that Earnest was a student at the school:

“California State University San Marcos identified Earnest as one of its students in a statement released Saturday evening. ‘We are heartbroken by this tragedy, which was motivated by hate and anti-Semitism,’ the school’s president, Karen Haynes, said, adding that the university is ‘dismayed and disheartened’ by Earnest’s alleged involvement.”

President Donald Trump, who was headed to campaign rally in Wisconsin, told reporters:

“We are doing some very heavy research and we will see what comes up but it looks like a hate crime. Hard to believe, hard to believe.”

However, the fact that the alleged shooter referenced the issue of immigration would seem to suggest that he was at least in part inspired by Trump’s hateful rhetoric about immigrants and immigration, which he has said is a national security threat to the United States.