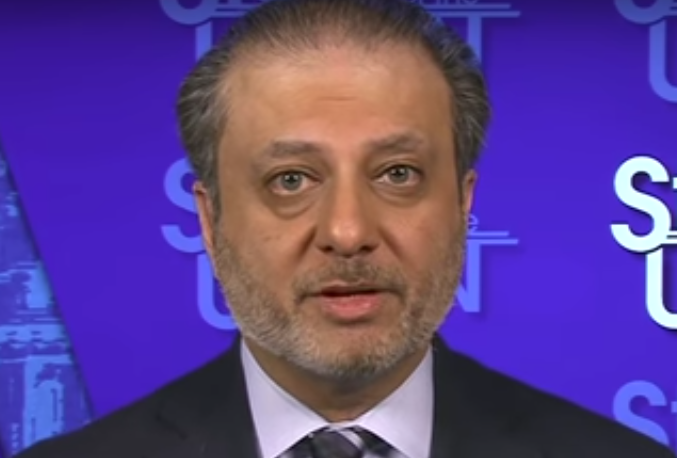 Former United State Attorney Preet Bharara warned President Donald Trump this week that the Southern District of New York is coming for him once his time in the White House comes to an end.

And while he can’t be indicted because of a ridiculous Justice Department guideline, Trump won’t be president forever no matter how desperate he tries to be. And when the day comes for him to leave office, the federal prosecutors of the SDNY and the FBI will be waiting with a shiny new pair of handcuffs to take him into custody.

During an interview with The Daily Beast, Bharara talked about this likelihood and discussed his own interactions with Trump before he was asked to resign in 2017.

First of all, Bharara revealed that Trump asked him for his personal phone number, which he found “odd.”

“He called me three times, and the third time I didn’t call him back,” he said. “He never said anything untoward or asked me to bring a case or not bring a case, but he seemed to want to cultivate some relationship, to have someone in a spot to be helpful to him.”

As we all now know, Trump certainly expected United States Attorneys to be his personal protectors. He frequently attacked former Attorney General Jeff Sessions for not being his fixer, and then he appointed Barr to the post. And Barr has acted as Trump’s protector ever since, which is why Barr is in major trouble now as Congress threatens to arrest him for refusing to comply with subpoenas.

As the top man at SDNY, Trump knew that Bharara could be useful to him. Had Bharara agreed to be Trump’s lackey, he would be off the hook for campaign finance crimes and current investigations would not have been started.

As for those investigations, Bharara believes that SDNY fully intends to prosecute Trump once he leaves office.

“My former office clearly endorses and believes the fact—as Michael Cohen admitted in open court—that he engaged in the conduct he pleaded guilty to at the direction of Individual 1,” he said. “Individual 1 is the president. Depending on what the other circumstances are, I believe there’s a reasonable likelihood that they would follow through on that. There’s a difference, though, between accepting a guilty plea from Michael Cohen and going to trial on the strength of that same witness after he’s gone to prison for lying.”

However, SDNY has other evidence to go on, which makes this legal battle an uphill one for Trump.

“It will be harder to shut down other investigations where the attorney general doesn’t have a tight leash on them,” Bharara said. “In the Southern District of New York, the Eastern District of Virginia, the D.C. District and other courts, I would expect things will unfold in the natural course.”

If you were wondering why Trump is so desperate to win in 2020, this is why. He’s frightened of going to prison where he belongs, and that’s why voters must reject him and send him there. Because re-electing him would be a miscarriage of justice that would tear this nation apart.