The United States Blues
Home News President Bone Spurs tells veterans that he wanted to give himself the... 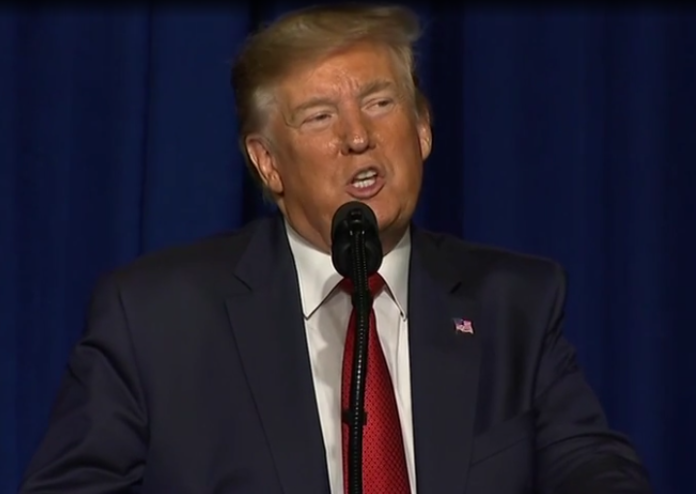 In yet another disgraceful example of unpresidential behavior, President Donald Trump told a room full of veterans on Wednesday in Kentucky that he sought to give himself the Medal of Honor, the highest award that can be presented to a member of the United States military for acts of valor.

Since the Civil War, there have only been 3,524 Medal of Honor recipients in American history. All of the recipients earned them fighting for our country and for their brothers in arms while in uniform, something Trump has never done because he dodged the draft during the Vietnam War.

But on Wednesday, as Trump spoke at the 75th annual national convention of American Veterans in Louisville, he told World War II veteran and Medal of Honor recipient Woody Williams that he wanted to give himself the Medal of Honor.

During his speech to a veterans group in Kentucky, Trump — seemingly joking but who can be sure — talks about giving himself the Medal of Honor. I’m surprised his bone spurs didn’t flare up while doing so. pic.twitter.com/4dPxlSlUl7

Williams earned his medal by fighting for four hours under heavy fire during the Battle of Iowa Jima in 1945, distinguishing himself at great personal risk so that our forces could advance against the Japanese. This is something that Trump would never have done and has never done in his life.

It is absolutely disgusting and shameful that Trump thinks he should get a Medal of Honor. He just insulted every recipient of the medal, especially those who gave their lives and received it posthumously.

The thing is that there is a process for receiving the Medal of Honor. It can be recommended through the military chain of command or recommended to Congress by a constituent. Either way, Congress awards the honor. The president merely presents it on behalf of Congress.

So even if Trump wanted to recommend himself for it, Congress would be out of line to award it because they would sully it by giving it to someone who refused to serve out of cowardice.

It’s almost like that time Trump said he always wanted a Purple Heart and was given one by a veteran even though Trump has never been in combat, nor has he been wounded in combat.

“I always wanted to get the Purple Heart,” Trump said. “This was much easier.”

Except this is much worse. Trump attempted to steal valor for himself, a crime that anyone else would be punished for committing if they possessed an unauthorized Medal of Honor.

Americans and every veteran and active-duty service member should be outraged.